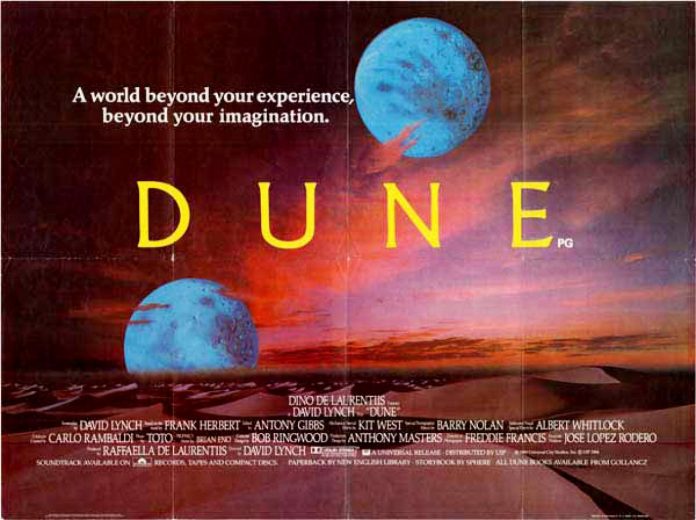 Anyone who was a fan of Frank Herbert’s book, Dune, would have been eager to see the film version especially as it was directed by David Lynch but, like the rest of us who saw it back in 1984, were horrified by the unholy mess and utterly incomprehensible story which finally crawled onto screen. Many of us are still trying to erase the sight of Sting standing legs akimbo wearing on only a pair of winged Speedo’s.

In fact the mad director Alajandro Jodrowsky was slated to direct it originally and was going to feature a score by Pink Floyd and star Salvador Dali, Orson Welles and Mick Jagger but so muh money was spent on pre prodution that there was little left to make the film itself. But there is a fantastic documentary about it called ‘Jodrowsky’s Dune’ and is well worth a watch.

In the end the film which had a budget of $40m made only $31m at the box office worldwide and was slated by nearly everyone.

But it seems that Hollywood is going to give it another try and this should be much better as the director Dennis Villeneuve has apprantly signed on the helm the project. Interestingly the news words it as ‘the Dune series film project’ and as this is such a huge book it seems to suggest that this may well be some sort of franchise.

It’s early days yet and Villeneuve has gone on record to say what a huge sci-fi fan he is and seeing as his films include ‘Arrival’ ( one of last years best films and already with Oscar noms) and the forthcoming Blade Runner sequel the Dune remake should be in safe hands.

Here’s the trailer for the original……