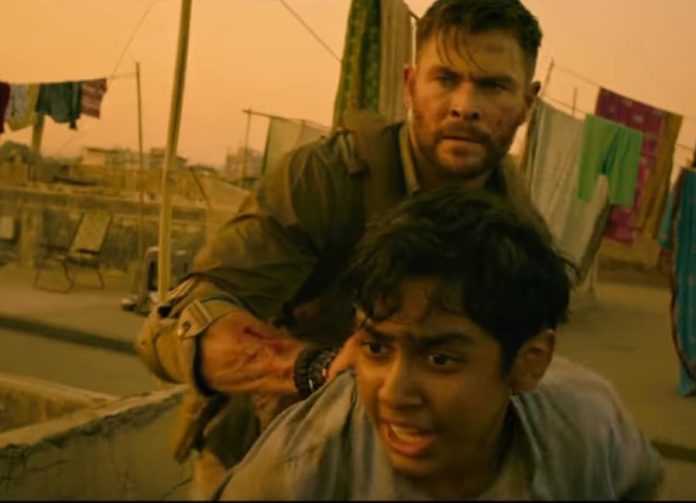 Not the long unawaited story of dentistry, Extraction is a Netflix action thriller starring Chris Hemsworth. The Extraction trailer looks pretty high octane stuff too which is to be expected when its been directed by stunt coordinator Sam Hargrave who has an extensive career in loads of big blockbusters that have included The Avengers films and many others in the Marvel franchise as well as the brutal Atomic Blonde. The pedigree continues with  “Avengers: Endgame” helmers Joe & Anthony Russo producing the film although Hemsworth also gets a producing credit.

The story takes place in an underworld of weapons dealers and traffickers, and follows a young boy becomes the pawn in a war between notorious drug lords. After being trapped by kidnappers inside one of the world’s most impenetrable cities, his rescue beckons the unparalleled skill of a mercenary named Tyler Rake (Hemsworth). Rake, a fearless black market mercenary, embarks on the most deadly extraction of his career when he’s enlisted to rescue the kidnapped son of an imprisoned international crime lord. But he is a broken man with nothing to lose, harboring a death wish that makes an already deadly mission near impossible.

The Extraction trailer is a relentless barrage of action and Sam Hargrave directorial debut , and if this is anything to go by looks impressive having obviously learnt a huge amount over his stunt career. Hargrave and Joe Russo co-wrote the script which is based on the graphic novel, “Ciudad”. It was rumoured that this was a project being lined up for Arnie or Bruce Willis but in fairness Hemsworth looks the part if the Extraction trailer is anything to go by. Extraction co-stars David Harbour (Hellboy), Derek Luke, Fay Masterson, Golshifteh Farahani and newcomer Rudhraksh Jaiswal.