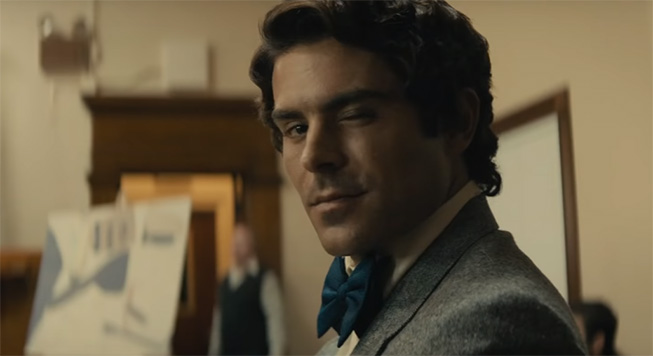 Serial killers have always held a fascination for tabloid newspapers and films alike and the Extremely Wicked, Shockingly Evil and Vile trailer is about one of the most infamous and prolific serial killers in American history, Ted Bundy.  Bundy was a good looking kidnapper, rapist, burglar, serial killer and necrophile of 30 young women or least that’s how many he confessed to as the actual figure is thought to be much higher.

A handsome man he easily coerced his female victims and as such the dashingly handsome Zac Efron is ideally cast in the role. Well now the film is about to premiere at the Sundance festival with the Extremely Wicked, Shockingly Evil and Vile trailer now out which shows him as  the serial killer. Directed by Oscar nominated Joe Berlinger who has made several documentaries in the past about infamous murder cases the film is written by Michael Werwie’s Nicholl Fellowship-winning script.

Berlinger is well suited to make a film about Bundy as he has already made a four part semi dramatized documentary series that features interviews with the notorious serial killer whose rimes occurred between 1974 – 1978 before he was caught. He was on Death Row for years before going to the electric chair in 1989 aged 42 years old.

The film tells the story the point of view of his longtime girlfriend  Elizabeth Kloepfer (Lily Collins), who for years was in complete denial about the accusations levelled against him but in the end it was her who gave the police the tip off. Cold blooded to the end it was only as he neared his execution that Bundy finally spoke about just how comprehensive his crime spree was and it was only then that everyone learnt the truth.