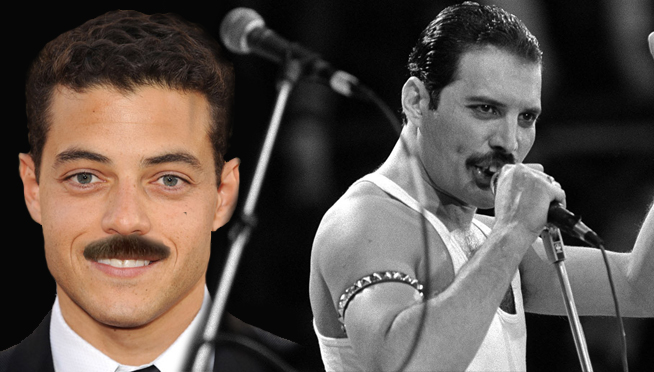 Over the years there have been all manner of biopics about famous singers with the most recent being ‘All Eyez On Me’ about the bullet riddled rapper Tupac Shakur. These biopics go through numerous rewrites due to the artists or their estate looking to sue for anything they deem libelous. At the moment there is a biopic of Madonna about to go into production about her early years which apparently she’s furious about deeming the whole script as a pack of lies.

The long gestating Freddie Mercury film is finally about to go into production shortly and will follow the band up until their barnstorming and era defining performance at Live Aid. Titled ‘Bohemian Rhapsody’  it will star  Mr Robot lead actor Rami Malek as flamboyant frontman Freddie Mercury.

X Men director Bryan Singer directs from a screenplay by Anthony McCarten (Darkest Hour, The Theory of Everything) with Graham King, Robert De Niro and Jane Rosenthal producing alongside band members Brian May and Roger Taylor.

The project has been in development at GK Films in LA for years, with Sacha Baron Cohen originally reported to be in the running to play Mercury until he had a bit of a fall out with lad guitarist Brian May. here h explains just what their difference of opinion was about…..

However Brian May sees it somewhat differently when doing an interview with UK newspaper the Daily Mail he called Cohen an, ‘arse’ for putting out that story about the film.