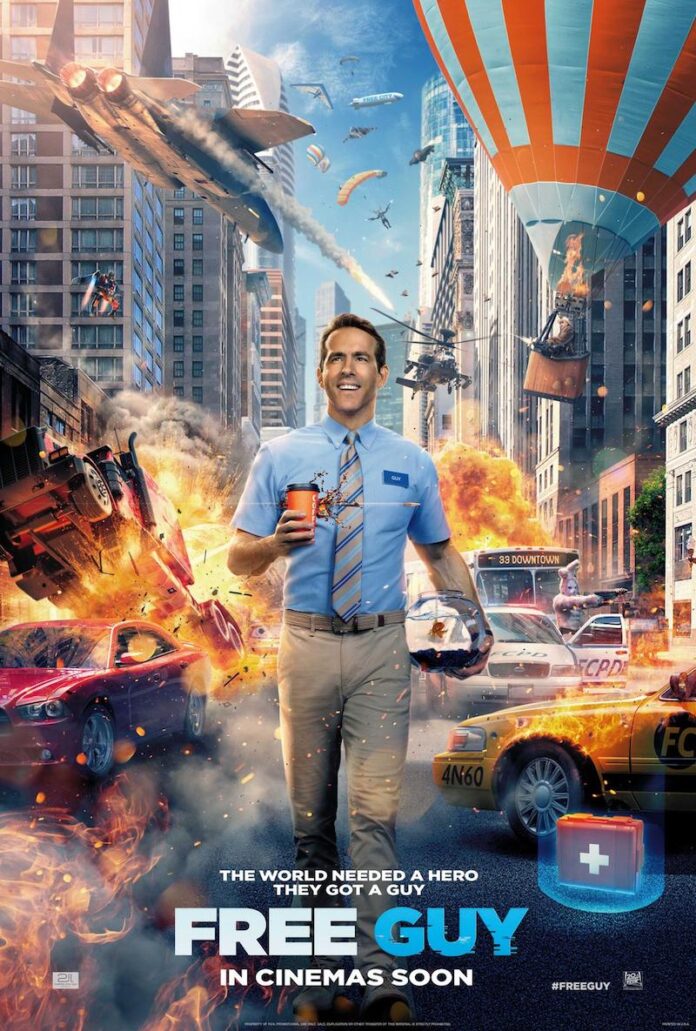 Landing in our inbox is the Free Guy trailer which is Ryan Reynolds new film that, like so many films, is finally getting released having been postponed three times previously due to the pandemic.

In “Free Guy,” a bank teller who discovers he is actually a background player in an open-world video game, decides to become the hero of his own story…one he rewrites himself. Now in a world where there are no limits, he is determined to be the guy who saves his world his way…before it is too late. Starring Ryan Reynolds, Jodie Comer, Lil Rel Howery, Joe Keery, Utkarsh Ambudkar and Taika Waititi, “Free Guy” is directed by Shawn Levy from a screenplay by Matt Lieberman and Zak Penn and a story by Lieberman. The film is produced by Ryan Reynolds, p.g.a., Shawn Levy, p.g.a., Sarah Schechter, Greg Berlanti and Adam Kolbrenner with Mary McLaglen, Josh McLaglen, George Dewey, Dan Levine and Michael Riley McGrath serving as executive producers.

Some of the video gaming world’s most influential figures drop in for cameos in “Free Guy,” including: Imane “Pokimane” Anys, Lannan “LazarBeam” Eacott, Seán William “Jacksepticeye” McLoughlin, Tyler “Ninja” Blevins and Daniel “DanTDM” Middleton and as ever with gamers we can’t help but wonder just how many of them have ever had a girlfriend. There’s also rumours that there will be some big name stars (that might possibly be Hugh Jackman or Dwayne Johnson) who will be making cameo appearances. The script was included in the 2016 Black List of “most liked” scripts so the hopes are high that this should be good and the free guy trailer certainly promises much. Directed by Shawn Levy who also produced the Oscar nominated sci-fi film ‘Arrival’ and was a friend of Robin Williams.