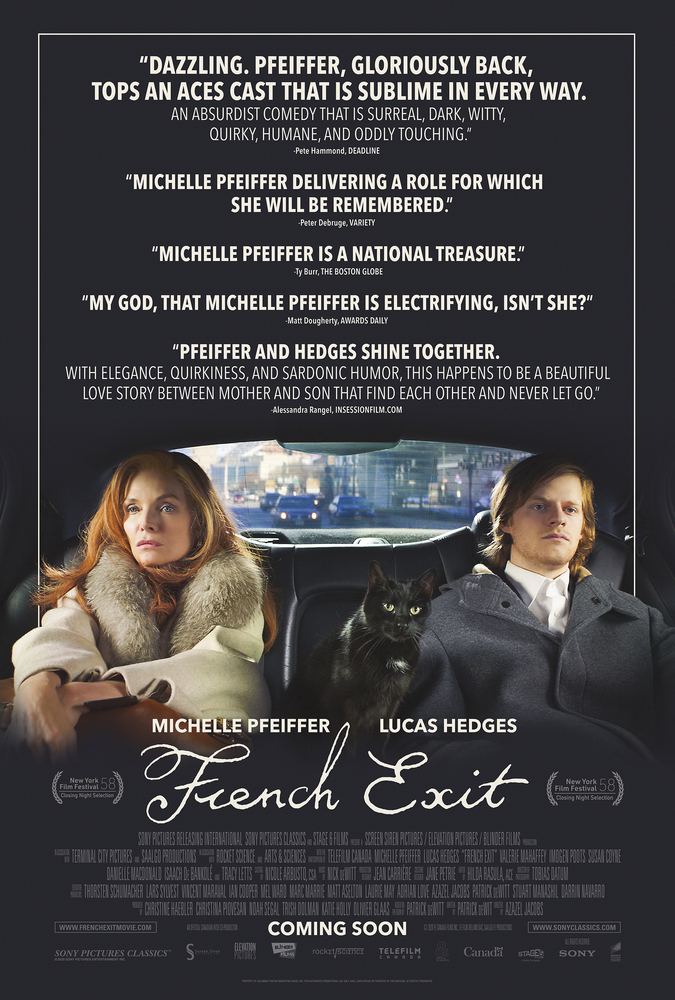 So when an email marked French Exit landed in our inbox our first thought was that it was a training  video for the French army learning how to hold high a white flag and shout, ‘We surrender!’ Instead it turns out to be the new Michelle Pfeiffer film and the French Exit trailer looks quirky. Pfeiffer, who had a bit of a fallow period for several years but since 2017, has been in a flurry of high profile, high performing films that started with Mother! and was then followed by Murder on the Orient Express, Ant Man and the Wasp and Maleficent Mistress of Evil not forgetting the all star blockbuster Avengers Endgame. And now we have the French Exit trailer….

“My plan was to die before the money ran out,” says 60-year-old penniless Manhattan socialite Frances Price (Michelle Pfeiffer), but things didn’t go as planned. Her husband Franklin has been dead for 12 years and with his vast inheritance gone, she cashes in the last of her possessions and resolves to live out her twilight days anonymously in a borrowed apartment in Paris, accompanied by her directionless son Malcolm (Lucas Hedges) and a cat named Small Frank—who may or may not embody the spirit of Frances’s dead husband.

Starring Michelle Pfeiffer and Lucas Hedges (who had a run of potential award wining roles in Ben is Back, Honey Boy , Mid 90’s and Boy Erased). The French Exit trailer co-stars Valerie Mahaffey, Imogen Poots (from this years ‘Vivarium‘), Susan Coyne, Danielle Macdonald, Isaach De Bankolé, Daniel Di Tomasso and Tracy Letts. Directed by Azazel Jacobs who has an eclectic back catalogue and is written by Patrick DeWitt, whose last film was The Sisters Brothers, and is based on his own book…….

French Exit is pencilled in for a February 2021 release….