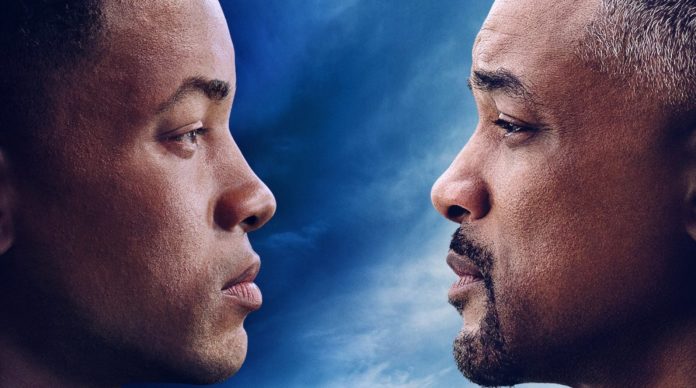 So whilst Will Smith’s career has stalled in terms of sure fire box office hits, Suicide Squad ,which was really more a vehicle for Margot Robbie , put him back on the map. The live action remake of Aladdin is next but after its premiere at CinemaCon a few weeks ago, Paramount Pictures has released the first look at the Ang Lee-directed sci-fi thriller Gemini Man trailer.

The film has Will Smith playing an ageing assassin attempting to leave the lifestyle, but finding himself hunted by a younger clone of himself. Smith also plays the clone, utilising extensive de-ageing to take him back to resembling early 1990s Smith. It’s a bit of CGI trickery that we saw on Michael Douglas in Ant Man and we’re about to see with Martin Scorsese’s The Irishman out later this year.

It’s not the only bit of high tech stuff we will see as Ang Lee’s version will be testing out 60fps 3D, and 120fps 2D in select locations. The last time we saw this was the directors ‘Billy Lynn’s Long Halftime Walk’ which unfortunately crashed and burned earning only $1.7m in the US. Far more successful was Peter Jackson’s The Hobbit which ran at a slightly lower rate however although much of the world will see Gemini Man in regular 24fps 2D version.

Coming up Smith has a run of films that could re-establish his A -list status with Bad Boys 3 recently having completed shooting with a fourth film in that franchise apparently already greenlit.

“Gemini Man” is currently slated to open in cinemas in the US on October 4th and on the 11th October in the UK.