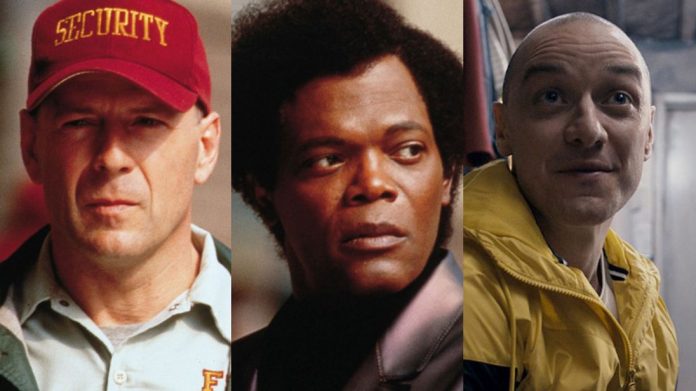 So we mentioned recently what we knew about writer / director M Night Shyalaman sequel to both 2000’s Unbreakable and 2017’s Split which is to be titled Glass. Universal studios have out about a few teasers for Glass trailer but know we have the first proper trailer for that most rare of things a sequel to two different films.

The Glass trailer sees Sarah Paulson playing a psychiatrist who specializes in ‘individuals who believe they are superheroes’ and is treating a trio of men at a mental hospital the biggest surprise being that its not our Editor and his two boys Damien and Adolf. (‘You’re fired!‘ – Ed). What we have in the Glass trailer is James McAvoy’s The Beast, Bruce Willis’ David Dunn and Samuel L. Jackson’s Mr. Glass.

We’ve found out some further stuff – the film is approx 2 and quarter hours long and was shot in a remarkably quick 39 days. Glass will be released as an IMAX film and is only the second film of Shyalaman’s to do so following After Earth.

Shyalaman has called the film ‘the first truly grounded comic book movie’. Just as well he told us that as for years we thought that all those Marvel films were documentaries!

Willis must be hoping that this will end a long run of duds that included a string of straight to video films such as Acts of Violence, First Kill, Marauders, Precious Cargo with only the Eli Roth reboot of Death Wish breaking the run and that only made $34m worldwide from a $30m budget so he must be hoping this breaks a string of ducks although the inevitable Die Hard sequel a prequel called ‘Die Hard : Year One’ goes into production shortly.