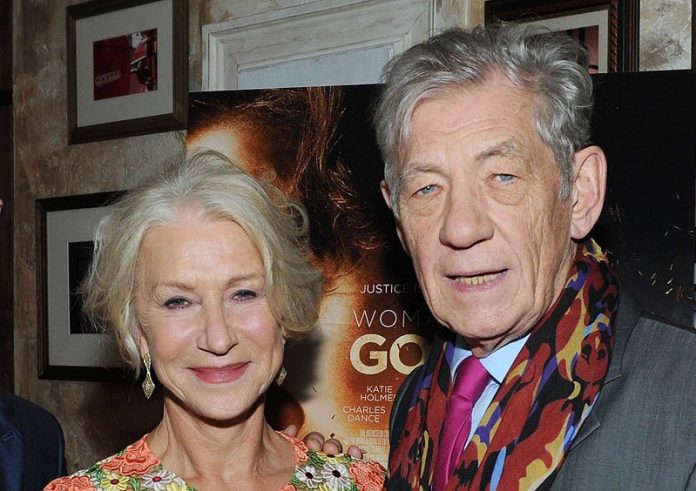 Ian McKellen & Helen Mirren are undoubtedly senior echelons of British acting but have never appeared together in a film before. All is about to change with ‘The Good Liar’.

This week principal photography began on location in London, on the New Line Cinema drama “The Good Liar,” pairing Oscar winner Helen Mirren (“The Queen”) and two-time Oscar nominee Ian McKellen (“Lord of the Rings: The Fellowship of the Ring,” “Gods and Monsters”) on the big screen for the first time.

Bill Condon, the Oscar-winning screenwriter of “Gods and Monsters” will direct and produce from a screenplay by Jeffrey Hatcher (“Mr. Holmes”), based on the widely acclaimed book by Nicholas Searle.

The Good Liar follows career con artist Roy Courtnay (McKellen) who can hardly believe his luck when he meets well-to-do widow Betty McLeish (Mirren) online.  As Betty opens her home and life to him, Roy is surprised to find himself caring about her, turning what should be a cut-and-dry swindle into the most treacherous tightrope walk of his life.

This promises to be one of those films with more twists and turns than a twisty turny thing. “The Good Liar” will also star Russell Tovey (Mindhorn) and Jim Carter (TV’s “Downton Abbey”).

Hopefully this should fare better than Helen Mirren’s last film the spooky, ‘Winchester‘ which had a low key release and only made $25m worldwide and was not quite on the same sale as her cameo in Fast and Furious 8 which made $1.236 billion.

Film looks set for a release in Spring 2019 so we’ll keep you posted.