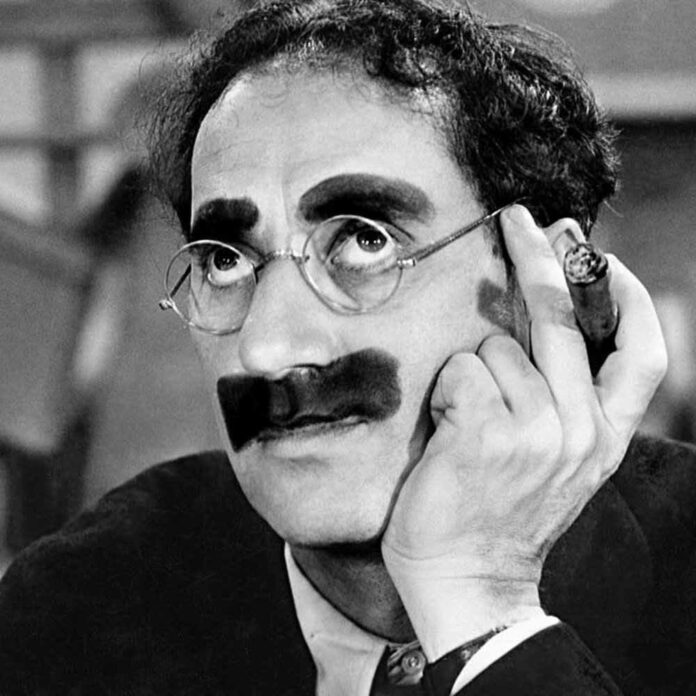 It’s highly unlikely that someone with thick pencilled brows and a heavily moustachioed top lip should become a movie star (though it hasn’t stopped Amanda Holden from trying) but Groucho Marx became something of a staple for impressionists but now there’s to be a film made of the most famous of the Marx brothers.

This Marx brothers bio-pic will follow Steve (Plummer) as he enters the world of aging comedian Marx (Rush) for his dream job, under the watchful eye of Erin Fleming (Miller) — a younger woman who had taken over Groucho’s personal and professional life. What follows is described as a ‘generational power struggle in a Grouchian comedy of horrors!’.

The project is being pitched at the upcoming Cannes Film Festival with the film produced by Miranda Bailey and Oren Moverman.

Executive producer Stephen Kelliher said: “We were immediately obsessed by the unique and fascinating true story of Raised Eyebrows which shines a light on one of the most complex and compelling relationships in showbiz history. To be making this film with such a prestigious team is a true honour.”

The Messenger and Rampart filmmaker Oren Moverman directs from a script he co-wrote with Steve Stoliar, based on his memoir Raised Eyebrows: My Years Inside Groucho’s House.

Groucho Marx died in 1977 aged 86 and was the last of the brothers. Best known as part of a trio with Chico and Harpo making a succession of superb comedies in the 1930’s. However if you want to win a pub quiz there were two other brothers Gummo and Zeppo of which the latter dropped out of the act early on in their career followed by Gummo soon after.