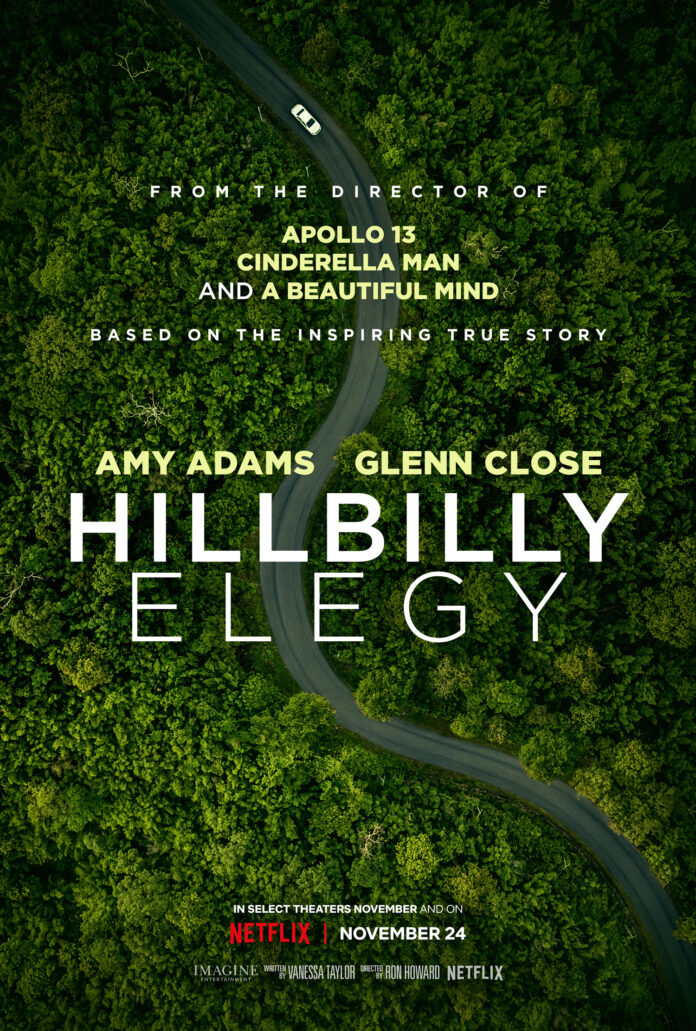 So Ron Howards latest film is almost on us with the release of the Hillbilly Elegy trailer. Now if you are unfamiliar with what a Hillbilly, it’s the sort of unsophisticated, uneducated, bigoted numb nut from the backwoods with little social skills. Basically the sort of person you couldn’t trust to sit the right way round on a lavatory and the nearest equivalent we have to that is probably the cast of The Only Way is Essex.

The film follows J.D. Vance (Gabriel Basso), a former Marine from southern Ohio and current Yale Law student, and on the verge of landing his dream job when a family crisis forces him to return to the home he’s tried to forget. J.D. must navigate the complex dynamics of his Appalachian family, including his volatile relationship with his mother Bev (Amy Adams), who’s struggling with addiction. Fueled by memories of his grandmother Mamaw (Glenn Close), the resilient and whip-smart woman who raised him, J.D. comes to embrace his family’s indelible imprint on his own personal journey.

Based on J.D. Vance’s #1 New York Times Bestseller and directed by Academy Award winner Ron Howard, HILLBILLY ELEGY is a powerful personal memoir that offers a window into one family’s personal journey of survival and triumph. By following three colorful generations through their unique struggles, J.D.’s family story explores the highs and lows that define his family’s experience. This looks like a film with impressive female performances and Amy Adams looks to be as good as ever and Glenn Close looks fantastic if the Hillbilly Elegy trailer is anything to go by and both have been Oscar nominated no end of times (Close – seven nominations and Adams six nominations) and yet never won!