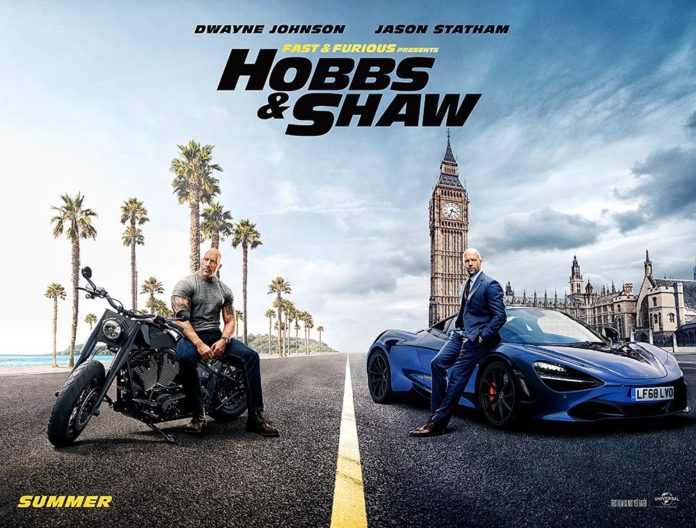 With the Fast and Furious franchise doing huge business there’s now a Hobbs and Shaw trailer as a spin off with Dwayne Johnson & Jason Statham in the respective roles. It was always likely that this was going to happen with both stars outshining Vin Diesel when they joined the Fast and the Furious. Rumours abound with the last F&F film that Vin Diesel was somewhat frosty to wards Johnson during filming which spilled over on to a few barbed comments on social media not that Johnson should worry as he’s currently the highest earning and most reliable box office film star in the world. So the Hobbs an Shaw trailer has has Hobbs (Johnson) as the loyal agent of America’s Diplomatic Security Service whilst Shaw (Statham) is a former British military elite operative turned criminal. When cyber-genetically enhanced anarchist Brixton (Idris Elba) gains control of an insidious bio-threat that could alter humanity forever, and bests a fearless rogue MI6 agent (Vanessa Kirby) who happens to be Shaw’s sister – these two enemies will have to partner up to bring down the only guy worse than themselves. Ex stunt man turned directed David Leitch helms the film from a script by Chris Morgan who has written several of the later F&F films. Leitch is no slouch in the action department having directed the magnificent Atomic Blonde and last years Deadpool 2. Both of which did good box office business but we’re a bit unsure of this new trailer as the tone seems a bit uneven playing it more for laughs with a song that doesn’t seem to fit with the image and action. and fact fans will know that fellow WWE star Joe Anouai will play Johnson’s brother.

The film opens in cinemas in the UK and US on August 2nd.

Here’s the Hobbs and Shaw trailer……..