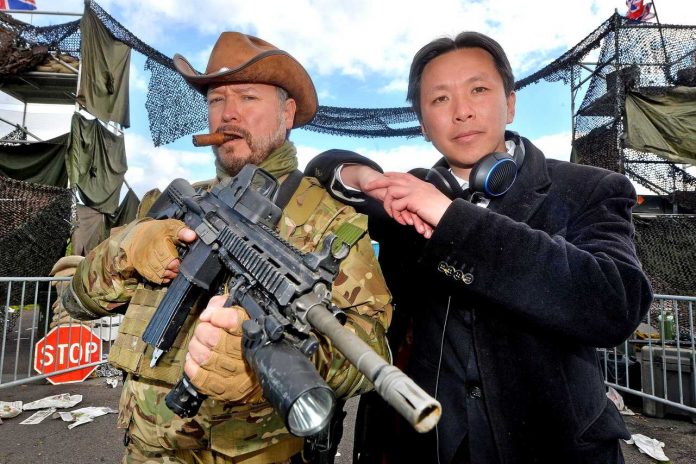 Working for our Editor means that we’re more than used to dealing with the brain dead (You’re fired! -Ed) but shooting has just finished on what could be the biggest zombie film shot in the UK. Entitled REDCON-1 and directed by  British-Chinese director Chee Keong Cheung it all stemmed from an idea he had about what would happen if zombies could retain some of their previous life skills. What if they were combat based? And how would a small troop of soldiers survive being sent into the heart of a seething mass of the undead, who don’t just bite… they fight back too.

With that notion began the journey by British-Chinese director Chee Keong Cheung to realise REDCON-1 – a unique fusion of action, zombie horror and war, with the added element of mixed martial arts, which has just wrapped a ten week shoot across the UK, with over 1500 extras and a mass of military hardware.

In REDCON-1, Eight Special Forces soldiers are sent on a suicide mission into the zombie-infested remains of the UK, to find a scientist who may hold the key to ending the viral outbreak that has turned the population into flesh-eating undead. Chee’s central idea attracted the attention of Carlos Gallardo, producer of the acclaimed El Mariachi, Desperado and Once Upon a Time in Mexico trilogy, and Kevin Eastman, co-creator of Teenage Mutant Ninja Turtles, who came on board as executive producers on REDCON-1. “Carlos and Kevin have built huge followings for their creativity because they respect their fanbases, and I found enormous inspiration from them both, as I sought solutions as to how I could create an action horror epic that rewards fan commitment with everything we can get for them on screen,” explains Chee. Chee also knew that there was a well of talent and goodwill across the UK, that could help him realise his vision. “Lancaster, Glasgow, Edinburgh, Manchester, Rugby and London all feature, along with two prisons, an aerodrome, a church, supermarkets, the Barras in Glasgow, Tower Bridge in London and many amazing abandoned locations and council estates.” It was those estates where Chee found, to his gratitude, a lot of support as he witnessed communities coming together to get involved, and in turn grow the very nature of the scenes taking place and thus the size of the movie. Exec producer Carlos Gallardo believes that he hasn’t seen organic filmmaking like this since he produced with Robert Rodriguez on El Mariachi – a ground-breaking movie that turned independent filmmaking on its head. “Every once in awhile a revolutionary talent comes along that changes everything. You’re fortunate if you get to work with one of those in your career. I got lucky twice.”

Chee, along with producer Ioanna Karavela and Mark Strange, needed not only the help of many willing people who got together in front and behind camera (director of photography is Lorenzo Levrini) to help, but also those who have access to heavy duty stuff! Like 15 tanks, an armoury to match, plus police cars, ambulances, troop carriers, helicopters, speedboats, munitions, weaponry and explosives. Into that volatile mix he had to have skilled enough stunt and fight performers to pull off balls-to-the-wall fight action, an enormous amount of fake blood and make-up, and a truly hardy team of actors, including Oris Erhuero (The Cursed Ones); Akira Koieyama (Streetfighter: Assassin’s Fist); former WWE/TNA wrestler Katarina Leigh Waters; Mark Strange (Stan Lee’s Lucky Man); as well as Executive Producer Carlos Gallardo himself.

As he completes the movie, Chee is now keen to turn to horror and action fans, to engage and involve them just as the public did around the UK during the filming. “We’ve got a lot of stories to share, assets to review, and decisions to make on how to shape all the footage. I’ve always known one thing – the fans who pay to see films, collect them and give so much time to share opinions, are the ones I want to reach. If they’re happy then maybe this movie can break out – and we can realise some of our other ideas of turning this into the first part of a trilogy with graphic novels and more.”

REDCON-1 will be released next year.