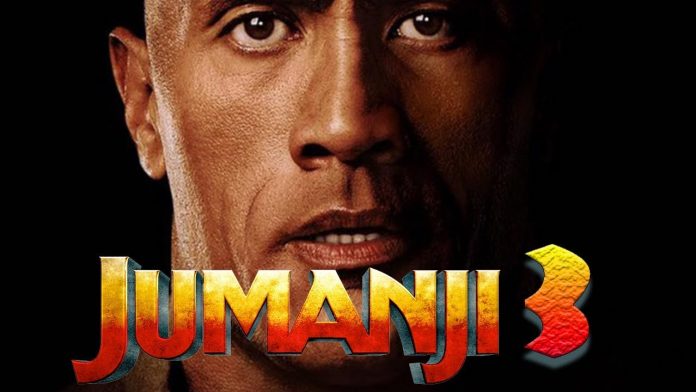 Yes you did read that right. With Jumanji having made an $961.9 million last year and in turn making it the third biggest grossing film of 2017 behind The Last Jedi (no1) and Beauty and the Beast (no2) and beating Wonder Woman into fourth place it was no surprise that Jumanji 2 was greenlit straight away but now comes news that another Jumanji sequel has also been given the go ahead.

The news was broken on Dwayne Johnson’s instagram account with a photo of the first film’s creative team including director Jake Kasdan, co-writers Jeff Pinkner and Scott Rosenberg, and producer Matt Tolmach.

On his instagram Johnson says: Ladies, gents and children of all ages. The JUMANJI SEQUEL is officially underway. Holy shit what a dynamite pitch from our writer/director Jake Kasdan. We couldn’t stop laughing and most importantly – like our first JUMANJI – the HEART in our story is our anchor. Writing with Jake, are our original JUMANJI writers Jeff Pinkner and Scott Rosenberg. Back to produce is my twin, Matt Tolmach and myself, @danygarciaco & @hhgarcia41. And sorry for the spoiler but @kevinhart4real dies in the first 15 seconds of the movie, to what I’m assuming will be a HUGE standing ovation from the audience and the cast…..

Johnson played the Jumanji avatar, Dr. Smolder Bravestone, alongside Karen Gillan, Jack Black, Kevin Hart and Nick Jonas in the film and it looks like the film will be released December 2019 release which should s it go up against the first Avatar sequel.

With another Jumanji sequel confirmed Johnson, who is currently filming Jungle Cruise, is already contracted to make sequels to San Andreas and is rumoured to star in Suicide Squad 2 , the remake of Big Trouble in Little China and is to start work on the Fast & Furious spin off Hobbs and Shaw (which must have irritated Vin Diesel).

This years gloriously daft Rampage has done well , his Die Hard meets The Towering Inferno tribute Skyscraper is predicted to do good box office too so it’s no surprise that the ex WWF champion is now the No1 box office star in the world.

How long before yet another Jumanji sequel is announced?

How does Will Smith career recover from that assault on Chris...