It’s probably only Disney’s popular Pirates of the Caribbean theme park ride that uber-producer Jerry Bruckheimer turned into a film uber franchise. The only other ride that we can think everyone has had a go on is Katie Price / Jordan but we digress. Now Disney bring us the the latest theme park  ride to film transformation with the Jungle Cruise trailer.

Based on Disneyland’s theme park ride where a small riverboat takes a group of travelers through a jungle filled with dangerous animals and reptiles, though surprisingly it’s not Kerry Katona’s ever expanding brood of kids, but here it’s with a supernatural element. The Jungle Cruise trailer takes a load of inspiration from the cinematic classic “The African Queen” although there also seems to draw on 1999’s “The Mummy” too. It stars Dwayne Johnson as a charismatic riverboat captain (which looks like a homage to Indiana Jones) and Emily Blunt as a determined explorer on a research mission. 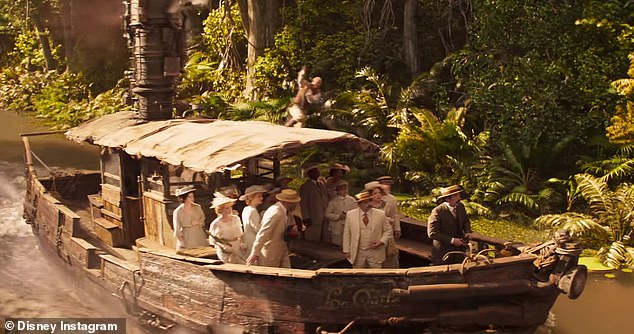 Jack Whitehall, Jesse Plemons, Paul Giamatti and Èdgar Ramírez and Brit favourite Andy Nyman (Ghost Stories) co-star in the film but the Jungle Cruise trailer concentrates solely on Johnson and Blunt. The production attracted mild controversy when it was revealed that the determinedly heterosexual Whitehouse is playing a gay character…..though obviously this would seem to be the essence of acting, ie pretending to be something that your not. Think Amanda Holden as a faithful wife to Les Dennis and you’ll know what we mean. The film is directed by Jaume Collett Sera whose usual fare has been thrillers usually starring Liam Neeson (The Commuter, Run all Night, Non-Stop) but also made the great summer shark movie The Shallows. Rumour has it that Johnson was looking for Wonder Woman director Patty Jenkins to direct but she’s been a bit busy with the sequel which is also out in summer 2020.

The original release date for Jungle Cruise in the US and UK on July 24th 2020 but we can confirm that it is now released in U.K. cinemas and on Disney+ with Premier Access on July 30, 2021.