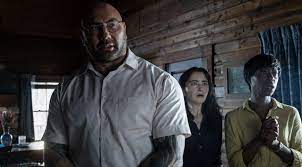 With the Knock at the Cabin trailer landing in our inbox the title puts us in mind of what became a regular Sunday morning occurrence as we woke up because of the Knock at the Door only to stagger downstairs only to find it was the Seventh Day Adventists trying to sell us The Watchtower. Every Sunday this would happen until eventually we were reduced to having to answer the door naked and seeing just how long they could hold a conversation with us whilst they tried not looking down at what could best be described as the last turkey in the shop……but we digress.

Based on the book The Cabin at the End of the World by Paul Tremblay the film adaptation is being helmed by the King of the Twist ending M. Night Shyamalan whose last few films have seen him back on form.

While vacationing at a remote cabin, a young girl and her parents are taken hostage by four armed strangers who demand that the family make an unthinkable choice to avert the apocalypse. With limited access to the outside world, the family must decide what they believe before all is lost.

Knock at the Cabin is in cinemas on 3rd February 2023

Here’s the Knock at the Cabin trailer……