So Kevin Costner has had an interesting career hitting the dizzy heights of box office success and Oscar glory soon followed by box office bombs that effectively killed his A-list status. Whether we’ll ever see the likes of The Untouchables, Dances with Wolves, Robin Hood, Waterworld or The Bodyguard is debatable (but please don’t ever repeat flops like The Postman). We’re glad to see that things are on the up with the arrival of the Let Him Go trailer which looks a pretty good and emotionally draining thriller.

Following the loss of their son, retired sheriff George Blackledge (Kevin Costner) and his wife Margaret (Diane Lane) leave their Montana ranch to rescue their young grandson from the clutches of a dangerous family living off the grid in the Dakotas, headed by matriarch Blanche Weboy (Lesley Manville). When they discover the Weboys have no intention of letting the child go, George and Margaret are left with no choice but to fight for their family. 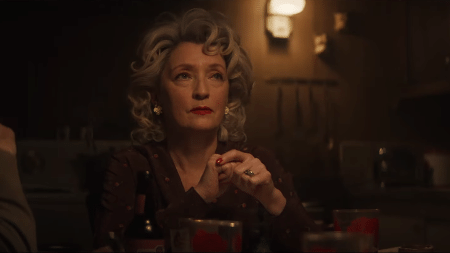 Starring: Kevin Costner, Diane Lane, Lesley Manville, Jeffrey Donovan, Kayli Carter, Booboo Stewart, Will Brittain  Directed by Thomas Bezucha he has adapted it from novel Let Him Go by Larry Watson. For us the highlight is Lesley Manville oozing evil and who knows maybe this could get her another Oscar nomination after her nom for ‘The Phantom Thread’ opposite Daniel Day Lewis. We’re pretty certain there’s got to be a climatic face off between her and Diane Lane but who knows. From the look of the Let Him Go trailer its not going to end well for some of them. Like so many films this was hit by the Kung Flu pandemic and its release delayed but will see a 6th November release in the US with a UK date to be confirmed soon.

Here’s the Let Him Go trailer…….