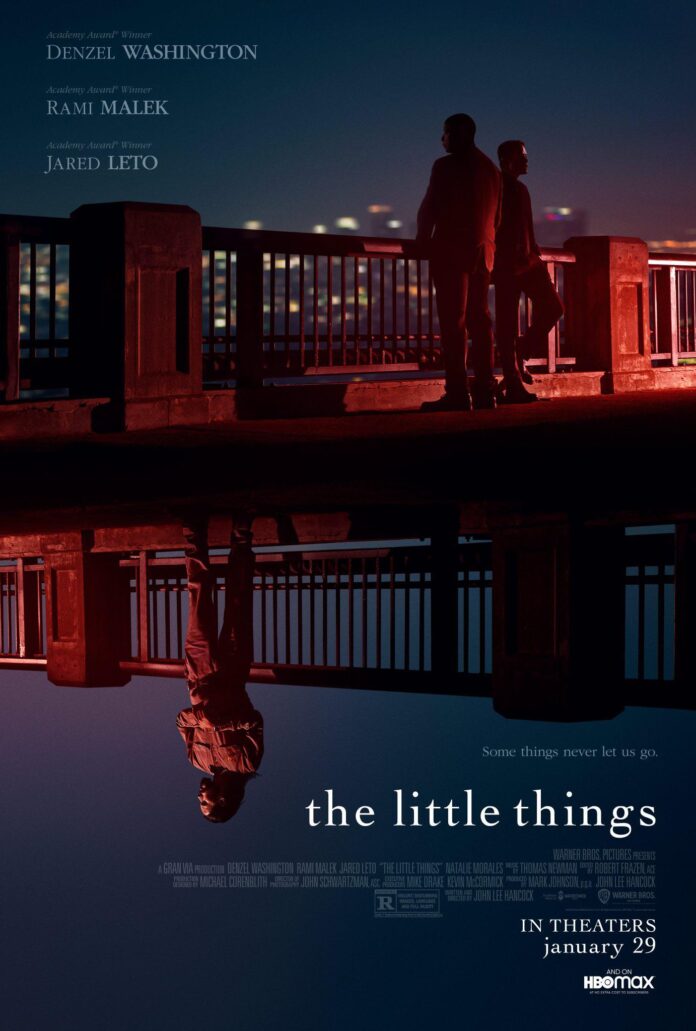 Much like the contents of our Editor’s swimming trunks in cold water its the little things that can be the most fascinating (‘You’re fired!‘ – Ed) and coincidentally landing in our in box is The Little Things trailer starring Denzel Washington. It’s been a while since we last saw him wreaking vengeance in The Equalizer films but now we see him in what looks like a decent serial killer / cop thriller.

Kern County Deputy Sheriff Joe “Deke” Deacon (Washington) is sent to Los Angeles for what should have been a quick evidence-gathering assignment.  Instead, he becomes embroiled in the search for a killer who is terrorizing the city.  Leading the hunt, L.A. Sheriff Department Sergeant Jim Baxter (Malek), impressed with Deke’s cop instincts, unofficially engages his help.  But as they track the killer, Baxter is unaware that the investigation is dredging up echoes of Deke’s past, uncovering disturbing secrets that could threaten more than his case.

From the trailer this looks like might be a bit of a cat and mouse film between Academy Award winners Denzel Washington (“Training Day,” “Glory”), Rami Malek (“Bohemian Rhapsody” – watch the world premiere HERE) and Jared Leto (“Dallas Buyers Club”) in what looks like it will be a  psychological thriller.  John Lee Hancock (the excellent and underrated, “The Founder”) helms the film from his own original screenplay. The main cast also includes Natalie Morales (“Battle of the Sexes”), Terry Kinney (“Mile 22,” TV’s “Billions”), Chris Bauer (“Sully,” TV’s “The Deuce”), Joris Jarsky (TV’s “Bad Blood”), Isabel Arraiza (TV’s “Pearson”) and Michael Hyatt (“Crazy Ex-Girlfriend”).

The film has a 29th January 2021 release date and we await a confirmed UK release date but with Warners committing to release their 2021 slate of films on streaming its likely that HBO Max is where this will be released and anything  Denzel is in we’re keen to see.