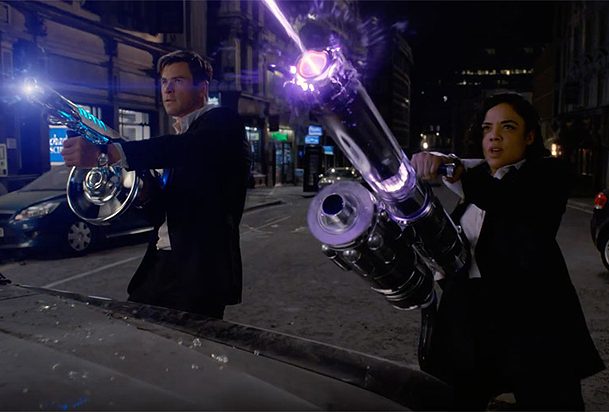 The Men in Black International trailer or Men in Black 4 as it actually was going to be a mash up with the 21 Jump Street franchise as we reported here some time ago. Anyway that has not happened and instead the film makers have now had a reboot of with Tommy Lee Jones and Will Smith no longer involved and taking over their roles are Chris Hemsworth and Tessa Thompson as the lead agents H and M respectively in this UK-set take on the sci-fi comedy films and will be set in the same continuity as the previous films.

Their latest case from the Men in Black International trailer has them called upon them to solve a murder mystery with global implications. Also starring are  Liam Neeson, Kumail Nanjiani, Rafe Spall, Rebecca Ferguson and the always great Emma Thompson. It’s also the first film not to be directed by Barry Sonnenfeld with the reins being taken over by F. Gary Gray (“The Fate of the Furious”) helms the new take from a script by Art Marcum and Matt Holloway who wrote Iron Man and …um….Transformers: The Last Knight. Although we’re looking forward to seeing this next Summer we’re disappointed that make up effects genius Rick Baker is no longer involved due to his retirement from the industry in 2014.

There will be a lot riding on this to ensure the franchise continues with the first film making  $589M, the second a disappointing $441m before returning to form with the third film that made a massive $624m and for Will Smith it was his last real hit before things crashed and burned with the disastrous After Earth, Focus & Concussion with only Suicide Squad doing any business.

The film opens in the UK and USA on June 14th.