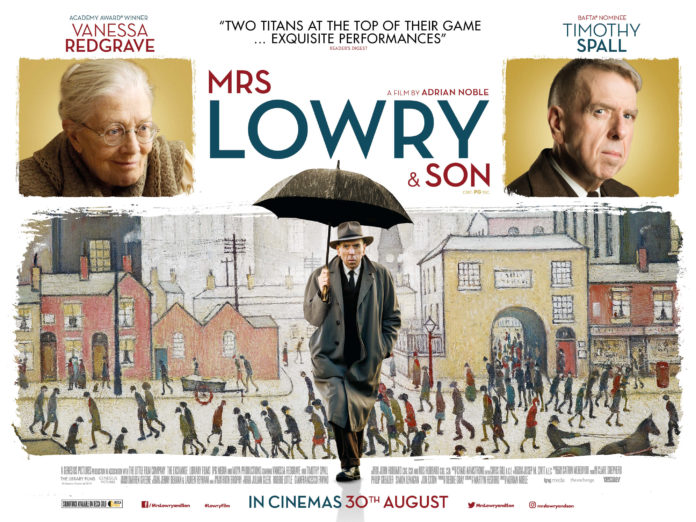 Our Editor has always fancied himself as a bit of an artist and painter which he has partly succeeded in spending most nights getting leathered at The Nag’s Head earning him the title of, ‘that total p*** artist’ by the landlord and his painting skills extended to creosoting his garden fence a job which he started 3 years and is yet to finish (‘You’re fired!’ – Ed). The Mrs Lowry and Son trailer is a different matter altogether and depicts the relationship between L.S. Lowry, one of Britain’s most iconic artists, and his mother Elizabeth, with whom he lived until her death.

The film follows Lowry (Timothy Spall) in the beginnings of his career, as he yearns for his work to be appreciated in London. However, his disdainful mother, Elizabeth (Vanessa Redgrave) actively tries to dissuade her bachelor son from pursuing his artistic ambitions. Elizabeth never fails to voice her opinion at what a disappointment he is to her. At the same time, the film explores how Elizabeth is the very reason Lowry paints anything at all, as he desperately seeks to create something, anything, which will make her happy, creating a clever layer of tragic irony. This powerful, yet humorous story imagines the impact this obsessive mother and son relationship had on the great artist. Love is at the very heart of this film.

L.S. Lowry became internationally famous for his depictions of 20th century industrial life in the North West of England, and the legacy of his work remains a huge presence in the region, not least at The Lowry, a purpose-built art gallery in Salford Quays. Such was his eventual success that he was offered five honours over his lifetime, including a knighthood in 1986 – all of which he rejected – and his work was displayed in a retrospective, record-breaking exhibition at the Tate where his work sells for millions.