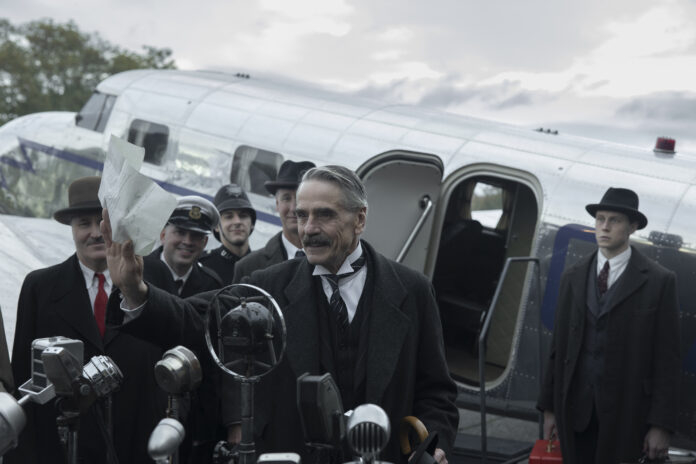 Prime Minister’s are bestowed with legacy’s they have little control over. Thatcher had several but over the last two decades Prime Minsters have been anointed with less than enviable legacy’s. For Blair it was Iraq, for Brown it was economic collapse, Cameron was the Brexit vote, May was screwing up any Brexit agreement and for Boris … well where do you start? A blithering idiot with the dishevelled appearance of a bin bag of albino body parts and a liar of such proportions that he can’t even be trusted to sit the right way round on a lavatory. But going back to the 1930’s, for Neville Chamberlain’s it was returning from a chat with Hitler assured that there would be peace in our times. It didn’t quite work out like that. Well now we have, Munich The Edge of War trailer …….a film that is based on the international bestseller by Robert Harris.

It is Autumn 1938 and Europe stands on the brink of war. Adolf Hitler is preparing to invade Czechoslovakia and Neville Chamberlain’s government desperately seeks a peaceful solution. With the pressure building, Hugh Legat, British civil servant, and Paul von Hartmann, German diplomat, travel to Munich for the emergency Conference. As negotiations begin, the two old friends find themselves at the centre of a web of political subterfuge and very real danger. With the whole world watching, can war be averted and, if so, at what cost? Two friends. One Moment in history. An espionage thriller like no other.

Here’s the Munich The Edge of War trailer…..