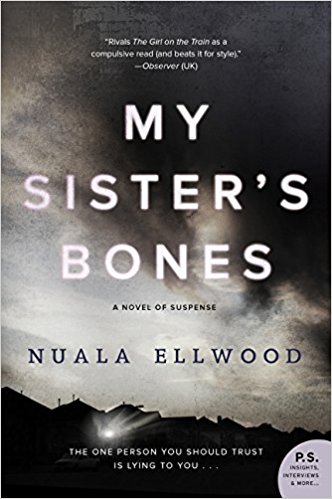 Before we get any complaints My Sisters Bones is a recent best selling novel by author Nuala Ellwood described by the Observer as a debut which “…rivals The Girl on the Train as a compulsive read” and producer Bill Kenwright has optioned the rights to make it into a film.

A dark, spine-tingling psychological journey, which explores Post Traumatic Stress Disorder (and is partially inspired by the late Marie Colvin), MY SISTER’S BONES takes the conflicts of war, and of the domestic, and weaves a powerful story of love, regret, and hope. Published by Penguin it was critically acclaimed on its release in February 2017, described as “memorable (and) jaw-dropping …” by The Sunday Times, with the author named one of The Observer’s ‘New Faces of Fiction 2017′.

Kate, a decorated war reporter, returns home from Syria after the death of her mother. Haunted and isolated, Kate becomes increasingly aware of her feelings about her tragic childhood, whilst struggling to separate memories of Syria from day to day life. And when seemingly strange happen in the house next-door, Kate soon has to question what is actually real and what is just in her mind…….

Producer Bill Kenwright commented on the acquisition: “As a producer I am always looking for that intangible something special. And I love thrillers! On reading Nuala’s novel I immediately thought this could be the one; a thriller that transcends the genre, almost reinvents it. I bought multiple copies for my friends and the verdict was unanimous: the best British thriller in recent memory. So the search begins, to find a screen-writer that matches Nuala’s extraordinary talent for character, suspense and great story-telling.”