Our Editor, forever behind the times, is still recovering from the shock of women being allowed to vote, so we’ve told him that this week is gender awareness week and he has to wear a dress for the next few days and has been clattering round the office in stiletto heels (which apparently are his own) looking like a satanic pantomime dame on stilts (‘You’re fired!’ – Ed). But his interest in women’s rights was piqued when the On the Basis of Sex trailer was sent to us.

Set to be one of the year’s most inspiring and entertaining films, this is the powerful and timely true story of US Supreme Court Justice Ruth Bader Ginsburg who led the fight against gender discrimination and blazed an unprecedented trail for equality. From being one of only a few women accepted at Harvard Law to co-founding the Women’s Rights Project at the ACLU, Bader Ginsburg overcame all odds to become one of the most influential figures in the battle for equal rights, passionately arguing ground-breaking landmark cases and giving a voice to those unable to be heard. 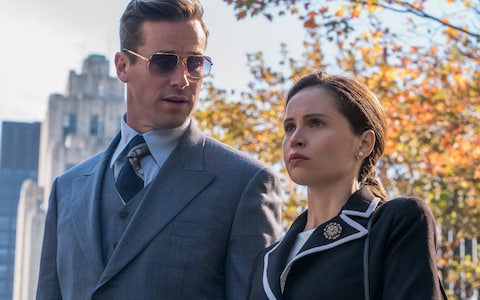 Lighting up the screen with fantastic performances, Felicity Jones stars as Ruth Bader Ginsburg and Armie Hammer as her husband Marty, a talented lawyer in his own right who offers unwavering support to his wife. Directed by Mimi Leder and written by Ruth Bader Ginsburg’s nephew, Daniel Stiepleman, On the Basis of Sex also stars Justin Theroux, Kathy Bates and Cailee Spaeny.

Felicity Jones is proving to be one of the UK’s highest profile actors having appeared in Rogue One, Inferno and A Monster Calls and was Oscar nominated for The Theory of Everything.

At present the On the Basis of Sex release date is to be confirmed.

Here’s the On the Basis of Sex trailer …….