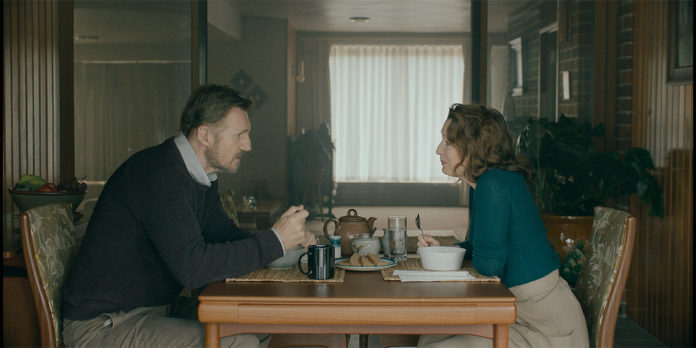 Those who are married realized that the honeymoon period where everything is rosy quickly ends so its fitting that the Ordinary Love trailer landed in our mailbox.

Joan and Tom have been married for many years. There is an ease to their relationship which only comes from spending a lifetime together and a depth of love which expresses itself through tenderness and humour in equal part. When Joan is diagnosed with breast cancer, the course of her treatment shines a light on their relationship as they are faced with the challenges that lie ahead and the prospect of what might become of them if something were to happen to her. ORDINARY LOVE is a story about love, survival and the epic questions life throws at each and every one of us

Starring Liam Neeson (Cold Pursuit) this looks like a move away from his action roles and we’re pretty sure that at no point does he say to the cancer, ‘I have a certain set of skills….and I will find you and I will kill you!’ It also stars Oscar nominee Lesley Manville who was great in The Phantom Thread with Daniel Day Lewis. Now we’re a bit cynical about marriage with the inevitable decline in any sort of sex life…just look at our Deputy Editor whose ex-wife cut him down to sex once a month. He was lucky, she cut two other guys out completely ……but we digress. There’s good advance word of mouth for the Ordinary Love trailer and the film could possibly be an awards contender. Unusually there’s two directors here, LISA BARROS D’SA and GLENN LEYBURN who have co-directed films before but there last film was way back in 2012 with Good Vibrations.

Win a copy of Peacemaker on blu-ray……