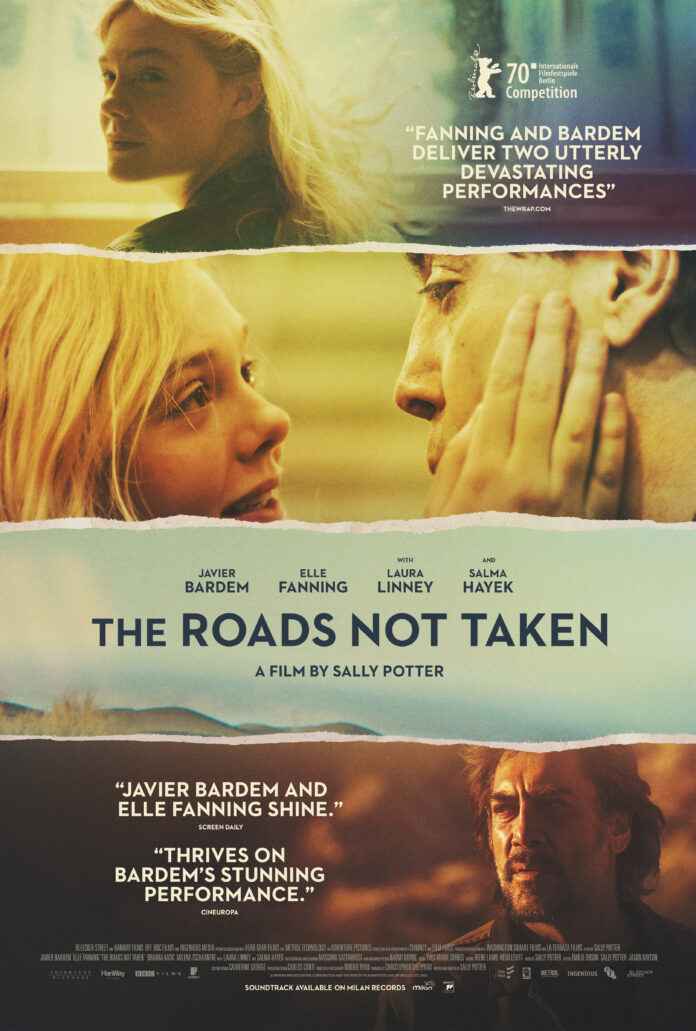 The Roads Not Taken trailer landed on our desk and for fans of Javier Bardem you are definitely going to want to catch his new film which has a great cast.

THE ROADS NOT TAKEN trailer follows 24 turbulent hours in the life of father and daughter Leo (Bardem) and Molly (Elle Fanning) as she grapples with the challenges of dealing with her father’s chaotic mental state.  But as they weave their way around New York City, their ordinary but stressful day takes on a hallucinatory and epic quality, for Leo is seamlessly flowing in and out of two other parallel lives – a passionate marriage with his childhood sweetheart Dolores (Salma Hayek) in Mexico a life of solitude on a remote Greek island, where a chance encounter with two young tourists unmasks some uncomfortable truths….The film weaves a rich, cinematic tapestry as Leo’s parallel lives – visible only to him – gradually unravel in moments of tragedy, happiness, regret and humour.  It is only Molly who eventually begins to understand his secret selves.

The award-winning writer and director Sally Potter’s ground-breaking credits include the likes of Orlando, Ginger & Rosa, The Party and Yes. Shot in Spain with Sally Potter’s long-time collaborator Christopher Sheppard (The Party, Ginger & Rosa, Orlando) the film is produced through Adventure Pictures. The Road’s Not Taken was co-developed by BBC Films and the BFI and is funded by HanWay Films, Bleecker Street, Ingenious Media, BBC Films, the BFI (awarding National Lottery funding), Chimney Pot Sverige AB and Film i Väst and was nominated for Best Film for the Golden Berlin Bear award.

It was released in the US back in March this year but due to the Kung flu pandemic laying waste to the world The Road’s Not Taken will now open across the UK and Ireland on September 11 2020.

Here’s The Road’s Not Taken trailer……..