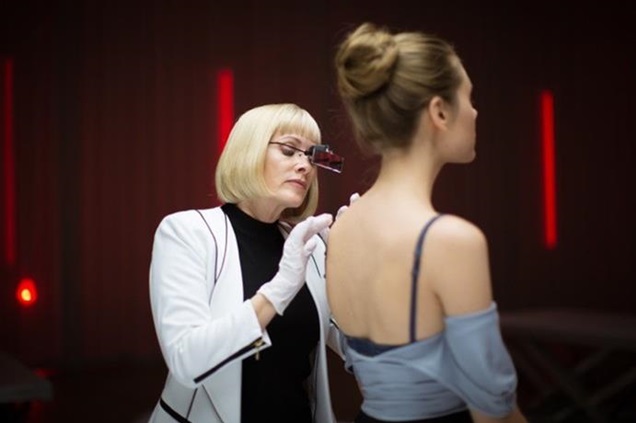 Those familiar with the work of writer / director Richard Stanley will remember the audacious debut of ‘Hardware’ which was followed by ‘Dust Devil’, which the studio butchered, and then followed it with what would have been a fantastic film of ‘The Island of Dr Moreau’, if h had been allowed to carry out his vision. Instead he found it sabotaged by a bonkers mad performance by Marlon Brando who painted his face white and wore a bucket on his head and Val Kilmer whose ego was monstrously out of control. In the end Stanley was fired or left the film depending on your point of view and the film effectively ended his promising directing career and has since spent years in the wilderness.

Produced by Felix Von Poser  executive produced by Colin Geddes ‘Replace’ stars Rebecca Forsythe (The Bronx Bull) as a young woman afflicted by an unusual skin disease. When she starts to age rapidly, she discovers that she can replace her own skin with the flesh of others to maintain her beauty.

The film’s team includes genre stalwarts Richard Stanley (Hardware) as a co-writer and actress Barbara Crampton (Re-animator) among the cast as a futuristic dermatologist.

“Replace is a classic body horror set in the not too distant future. It’s a sexy, stylish and provocative riff on themes previously explored by David and Brandon Cronenberg in Rabid and Anitviral”. – it says here in the PR piece we’ve been sent…..

Replace will have its market premiere screening in Cannes with a festival premiere expected this spring.