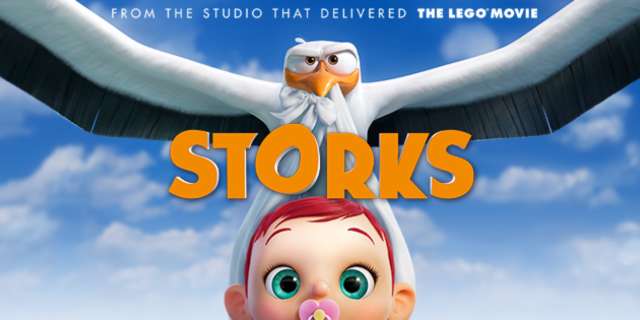 With Pixar still ruling the roost when it comes to animation and making a  fortune with it too means that all the other studios are keen for a slice of the action also and over the years there’s been varying degrees of success – for every ‘Shrek’ and ‘Ice Age’ there’s a ‘Mars Needs Moms’ and ‘The Ant Bully’.

Quite what the new animated film STORKS will be like is difficult to tell from this trailer but the synopsis runs along the lines of Storks deliver babies… or at least they used to. Now they deliver packages for a global internet retail giant.  Junior (Andy Samberg,Cloudy with a Chance of Meatballs, Hotel Transylvania), the company’s top delivery stork, is about to be promoted when he accidentally activates the Baby Making Machine, producing an adorable, and wholly unauthorised, baby girl.

Desperate to deliver this bundle of trouble before the boss gets wise, Junior and his friend Tulip (Katie Crown), the only human on Stork Mountain, race to make their first-ever baby drop – in a wild and revealing journey that could make more than one family whole and restore the storks’ true mission in the world.

The film is directed by Nicholas Stoller (Bad Neighbours, BAFTA nominee for Muppets Most Wanted) and Doug Sweetland (supervising animator on Cars, Oscar-nominated director of the animated short Presto), from a screenplay written by Stoller.