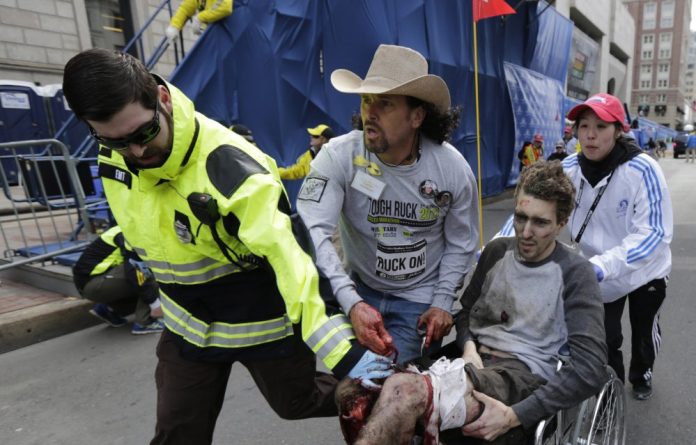 If you saw the excellent, ‘Patriots Day’ earlier this year about the Boston marathon bombing starring Mark Wahlberg then you’ll want to see, ‘Stronger’.  Based on the true story from the New York Times best seller, Jake Gyllenhaal stars as the working-class Boston man whose iconic photo from the 2013 Boston Marathon bombing captured the hearts of the world.

Stronger is the inspiring true story of Jeff Bauman, an ordinary man who captured the hearts of his city and the world to become the symbol of hope following the infamous 2013 Boston Marathon bombing.

Jake Gyllenhaal stars as Jeff, a 27-year-old, working-class Boston man who was at the marathon to try and win back his ex-girlfriend Erin (Tatiana Maslany). Waiting for her at the finish line when the blast occurs, he loses both his legs in the attack. After regaining consciousness in the hospital, Jeff is able to help law enforcement identify one of the bombers, but his own battle has just begun. He tackles months of physical and emotional rehabilitation with the unwavering support of Erin and his family. It is Jeff’s deeply personal account of the heroic journey that tests a family’s bond, defines a community’s pride and inspires his inner courage to overcome devastating adversity.

Having been nominated for an Oscar with Brokeback Mountain and nominated for Golden Globe for ‘Nightcrawler’ and BAFTA for last years excellent Nocturnal Animals we have a feeling that ‘Stronger’ with it’s emotional subject matter and also the part being a ‘disability’ role (always goes down well with the Academy) and the film being released around Christmas that means its fresh in the Academy’s mind when voting means that 2018 might be his year. Don’t forget you read it here first (obviously if he doesn’t get nominated forget everything we said and tell no one!).