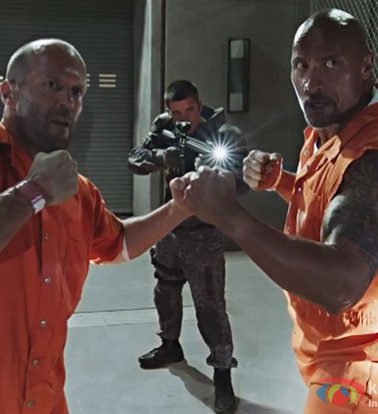 With Fast 8 having had the biggest opening weekend ever and about to make another shed load of money for the franchise the studio have picked up on audience’s positive reaction to the bromance between Dwayne Johnson & Jason Statham’s character’s.

With the Fast franchise being planned to run to ten films (though we doubt that they will stop at 10 if they continue to make so much money) the studio are looking to make the first spin off featuring Johnson & Statham.

There was an end credit scene planned for Fast 8 which was pulled for unknown reasons and it’s thought that that might be used as some sort of teaser trailer for the spin off and the studio have signed up screenwriter Chris Morgan to write it. Morgan has written for the franchise since Tokyo Drift (no3)  but has also written the disastrously expensive ’47 Ronin’ starring Keanu Reeves before ‘John Wick’ restarted his career.

It’s also rumoured that Charlize Theron may feature in the script as Cypher with the pair going after her. Quite when this might get to screen though is anyone’s guess.