Now we’re huge fans of Guy Ritchie’s gangster low life films, Snatch, Lock Stock and Two smoking barrels, RockNRolla (the less said about Revolver the better) but after the disappointment of King Arthur and the monumental box office returns of the live action  Aladdin he returns to the genre again. So pour yourself a scotch and don your finest threads, as the new year is arriving with style and sophistication, with the first glimpse of his new film THE GENTLEMEN trailer which bursts onto the scene in UK and Irish cinemas on Wednesday 1st January 2020. Guy Ritchie is going back to his roots with THE GENTLEMEN, releasing in the year that marks the 20th anniversary of his iconic feature, SNATCH.

THE GENTLEMEN follows American expat Mickey Pearson (Matthew McConaughey) who built a highly profitable marijuana empire in London. When word gets out that he’s looking to cash out of the business forever it triggers plots, schemes, bribery and blackmail in an attempt to steal his domain out from under him. 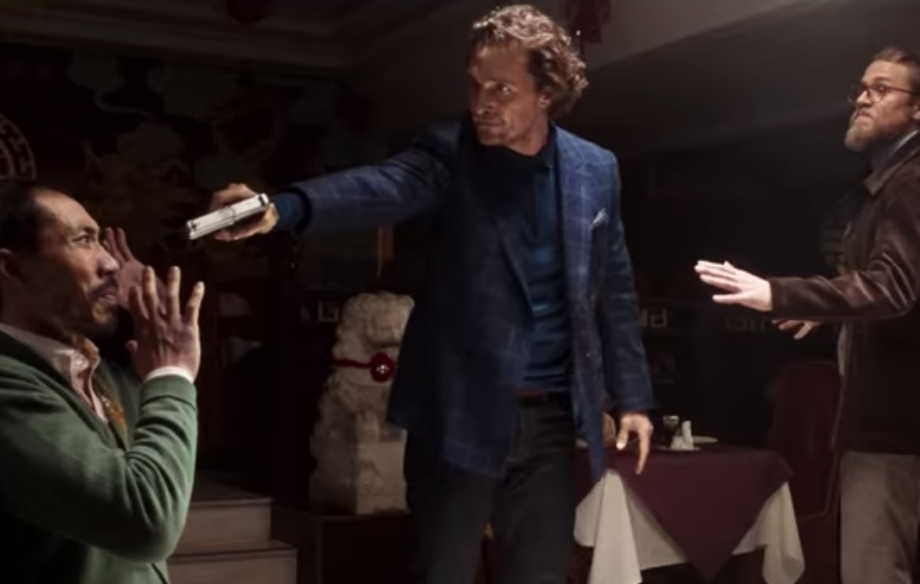 With a really impressive all-star ensemble cast including Matthew McConaughey, Charlie Hunnam, Henry Golding, Michelle Dockery (hot off the success of the Downton Abbey film), Jeremy Strong, Eddie Marsan, Colin Farrell, and Hugh Grant, THE GENTLEMEN is a highly anticipated, star-studded action comedy. We’re especially looking forward to Hugh Grant who has had a revival of sorts in a run of roles that includes Florence Foster Jenkins, Paddington 2 and A Very British Scandal, all of which were reminders of just what a gifted actor he is and The Gentlemen trailer has him as some sort of lairy cockney acting as some sort of narrator to the unfolding gangster mayhem.