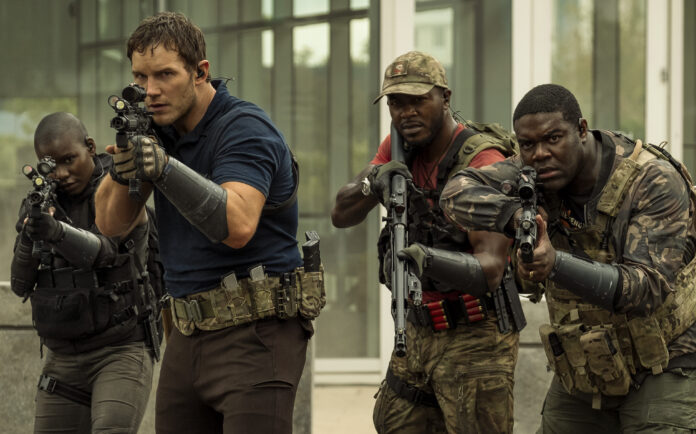 In The Tomorrow War trailer, the world is stunned when a group of time travelers arrive from the year 2051 to deliver an urgent message: Thirty years in the future mankind is losing a global war against a deadly alien species. The only hope for survival is for soldiers and civilians from the present to be transported to the future and join the fight. Among those recruited is high school teacher and family man Dan Forester (Chris Pratt). Determined to save the world for his young daughter, Dan teams up with a brilliant scientist (Yvonne Strahovski) and his estranged father (J.K. Simmons) in a desperate quest to rewrite the fate of the planet.

Directed by Chris McKay and written by Zach Dean The Tomorrow War trailer also stars
Yvonne Strahovski, J.K. Simmons, Betty Gilpin, Sam Richardson, Edwin Hodge, Jasmine Mathews, Ryan Kiera Armstrong, Keith Powers. Amazon reportedly paid $200 million for distribution rights to the project originally developed and produced by Skydance Media and Paramount Pictures. McKay has previously directed animation features such as The Lego Batman Movie & The Lego Batman Movie 2 as well as a load of Robot Chicken episodes including the Star Wars III episode. Writer Zach Dean has two previous films under his belt but he also has several action / adventure films that are already in pre-production including Methuselah that Danny Boyle will be directing and Michael B Jordan will star.

This is the first time that Chris Pratt has executive produced a film. Originally titled ‘Ghostdraft’ it was changed with Pratt saying, ‘The title, “Ghostdraft,” turned out to be problematic for various reasons so we started looking at other options… We went through:
Generation Alien, World War A, Generation Gone, Saving Private Ryaalien, WWZ2 but with As not Zs, HORIZON WHITESPIKE’ before the makers settled on The Tomorrow War.