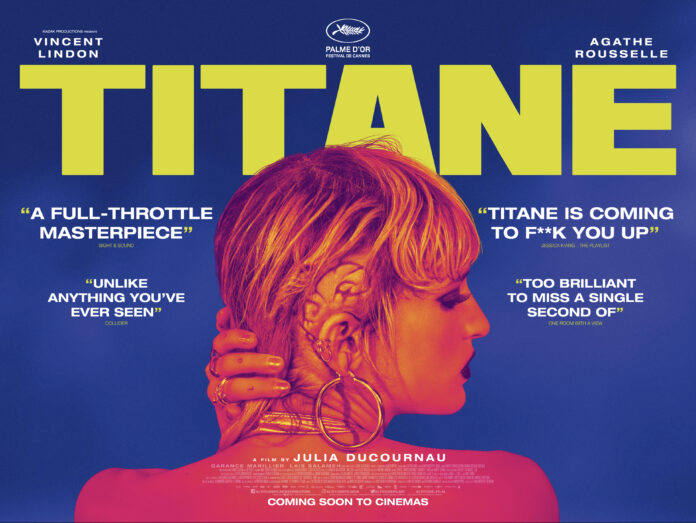 Anyone who saw French director Julia Ducournau debut feature film ‘Raw’ (read our disc review HERE) will know that she has a pretty brutal approach to her films and it was acclaimed by many as being the best film of the year. Anticipation for her next film was high and now five years later we have a glimpse of what to expect with the release of the Titane trailer. The film was critically acclaimed and hotly anticipated when it played at the Cannes film festival earlier this year eventually winning the Palme d’Or winner.  It is only the second time that a woman has won the top prize at the Cannes Film Festival, following in the footsteps of Jane Campion for The Piano and Ducournau’s own feature debut, RAW, which won the Fipresci prize at the Cannes Film Festival in 2016.

Titane (a metal highly resistant to heat and corrosion, with high tensile strength alloys)
follows a series of unexplained crimes when a father is reunited with the son who has been missing for 10 years. With the description it led many to believe that this may possibly have a David Cronenberg like interest in body horror…

The film was both written and directed by Julia Ducournau regarded as one of the most exciting directors working today. TITANE will receive its UK Premiere at the BFI London Film Festival, as the Time Out Special Presentation, on Saturday, 9 October and play in over 8 locations outside London as part of the festival’s UK-wide previews. The lead cast features veteran French actor Vincent Lindon (THE MEASURE OF A MAN) and breakthrough star Agathe Rousselle, in an unforgettable performance, alongside Garance Marillie (RAW), Lais Salameh and Bertrand Bonello.

TITANE opens nationwide on the 31st December 2021 in cinemas across the UK and Ireland.