So the poster for the rebooted Tomb Raider arrived with much talk about the bizarrely photoshopped neck of Alicia Vikander. Anyway with the photoshopper presumably having spent too much time at the zoo staring at giraffes and currently undergoing urgent photoshop re-training  we now have the first trailer.

Set seven years after the disappearance of her father, 21-year-old Lara has refused to take the reins of his global business empire, instead she’s working as a bike courier in London while taking college classes. Eventually, she becomes inspired to investigate her father’s disappearance and travels to his last-known location: a tomb on an island somewhere off the coast of Japan.

Suddenly, the stakes couldn’t be higher for Lara, who – against the odds and armed with only her sharp mind, blind faith and inherently stubborn spirit – must learn to push herself beyond her limits……..(or so it says on the synopsis).

We think the plot might have something to do with Miss Tomb Raider having to avert the end of the world only because it seems to be said every few moments. As athletic as she is in this Miss Tomb Raider also seems also to have been a part time Olympic long jumper too – see the trailer and you’ll know what we mean!

And there’s certainly a noticeable difference in physique between Alicia Vikander and Angelina Jolie who payed the role in two films as you might possibly be able to see here…. 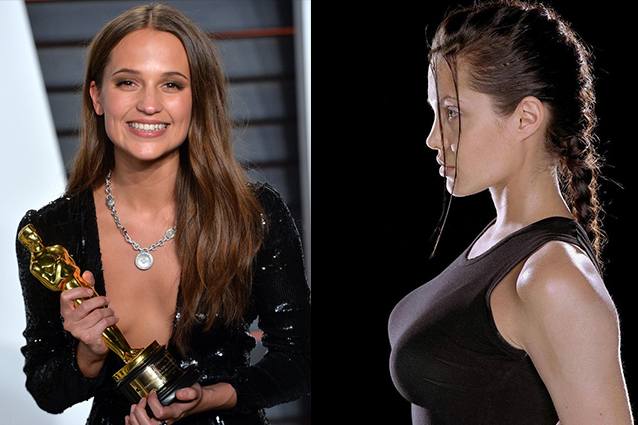 Walton Goggins, Daniel Wu, Hannah John-Kamen and Dominic West co-star in the film which opens in cinemas on March 16th.