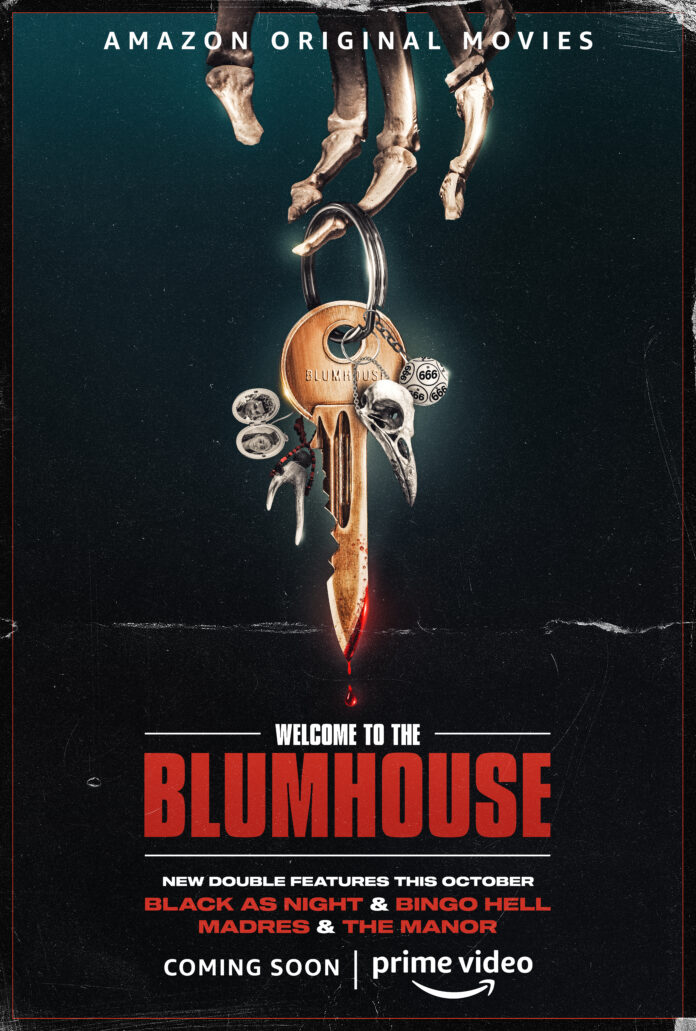 Welcome To The Blumhouse,” a series of unique, unsettling thrillers developed and produced with an eye towards original, diverse storytelling. Amazon Prime Video, in partnership with Blumhouse Television and Little Cinema Digital, presents the return of WELCOME TO THE BLUMHOUSE LIVE: an Emmy-nominated virtual adventure that celebrates the exclusive release of four highly-anticipated Amazon Studios and Blumhouse Television films on Prime Video this October.

BINGO HELL and BLACK AS NIGHT will be exclusively released on Prime Video on October 1st 2021 followed by MADRES and THE MANOR on October 8th 2021.

A feisty senior citizen fights to protect her beloved neighborhood from an evil force that’s taken over the local bingo hall and is killing the residents in gruesome ways.

A resourceful teenage girl driven by revenge, alongside her trusted friends, spends her summer battling vampires terrorizing her city of New Orleans.

Expecting their first child, a Mexican-American couple move to a migrant farming community in 1970’s California where strange symptoms and terrifying visions threaten their new family.

After suffering a mild stroke, Judith Albright reluctantly moves into a historic nursing home where she becomes convinced a supernatural force is killing the residents.

Barbara Hershey appears in The Manor and she kindly took time to speak to us about the film and horror…..

We were also lucky enough to speak to Bruce Davison about the film too…….

On Thursday, October 14, movie fans worldwide are invited to start Halloween early by stepping inside WELCOME TO THE BLUMHOUSE LIVE. Taking inspiration from the upcoming features Bingo Hell, Black as Night, Madres and The Manor, the WELCOME TO THE BLUMHOUSE LIVE experience weaves the 4 films together in chilling synchrony into one interactive and explorable story world. Sequel to the EMMY-nominated event from last year, WELCOME TO THE BLUMHOUSE LIVE is a spine-chilling thriller that matches the spirit of the films, drawing you in as part of the mystery. Guests of the event will become members of a search party, exploring a labyrinth of interactive rooms, deviant characters, musical performances, 360° audiovisual hypnosis, and more unsettling twists – all contained within a 4-story virtual house.

The experience begins with the vanishing of Estela, an elderly resident of the enigmatic Welcome To The Blumhouse manor. Before she disappeared, Estela was hunting a sinister evil lurking within the house. Now, to solve the mystery of her disappearance, guests will have to follow the clues she left behind in real time, while also uncovering what she learned before disappearing. But be warned, Estela isn’t the first to disappear down these dark corridors….