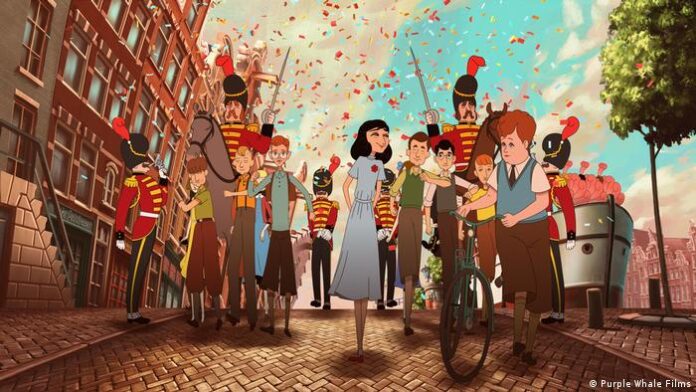 Anne Frank’s Diary remains an essential read…… and Where is Anne Frank is the sort of daft question Justin Bieber would have asked after his notorious visit to the museum he would ask having left the comment, ‘”Truly inspiring to be able to come here. Anne was a great girl. Hopefully she would have been a belieber” in the visitor book. He justified this saying . ‘Judge me by my music’. In which case ….Guilty. But we digress. Where is Anne Frank? is the title of a beautifully animated film from Israeli director Ari Folman based on her diaries which she wrote to her imaginary friend Kitty. With the film starring one year from now it’s Kitty (Ruby Stokes) who comes alive as a sort of wraith emerging from the ink if the diary on display in the Anne Frank Museum in Amsterdam where a queue is forming outside in the pouring rain and where a Mali family immigrant are living on the streets.

Where is Anne Frank? is not a direct dramatization of the diary but is told in a series of flashbacks where Kitty in a modern Amsterdam searches for Anne (Emily Carey)  and at the same time befriends refugees fleeing for safety. The analogy is obvious. Kitty initially invisible draws strength and visibility from being near to or in possession of the diary itself and steals it to prevent herself from dissolving into the ether as she looks for Anne. The diary also acts as some sort of portal to the past where she meets Anne as the film enacts moments from the diary albeit with some embellishments and though purists may not take to this several are beautifully realized  – Anne disappears into and explores a magical radio or when she walks down the street with a host of wannabe boy friends are all told with stylish visual flourishes.

A strong willed Kitty was very much part of Anne Frank’s own psyche and an amalgam of Hollywood stars photos of whom she had pinned to her wall –  and here as a red haired wraith her search ties in with immigrants seeking refuge which builds to a climactic scene with a somewhat naïve sledge hammer touch of a political message. There’s always a fear that as the years go on there’s a danger that persons and events get forgotten in the midst of time which is briefly alluded to in scene as modern day tourists look round her bedroom unable to recognise photos of famous film stars.

Where is Anne Frank? is aimed squarely at a YA generation and may well bring viewers back to reading the source material who may be in danger of forgetting or perhaps not even being aware of the Nazi concentration camps. Despite its uneasy and heavy handed political message the film has been made with the endorsement of the foundation set up in her memory but for purists this may not appeal but for younger audiences this is a timely reminder.

We chatted to Ruby Stokes about her role in the film……