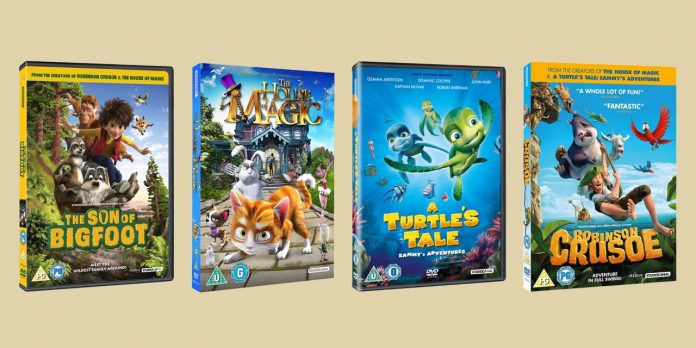 From the creators of ROBINSON CRUSOE and THE HOUSE OF MAGIC, STUDIOCANAL is pleased to announce that THE SON OF BIGFOOT – the epic coming-of-age adventure for all the family that tells the legendary tale of Bigfoot – will be available on DVD and Digital Download from 20 November 2017.

To celebrate, we’re giving away a copy of The Son of Bigfoot on DVD in a bundle with The House of Magic, A Turtle’s Tale & Robinson Crusoe.

Adam, a thirteen-year-old outsider, sets out on a daring quest to uncover the mystery behind his long-lost dad – only to discover he is the legendary Bigfoot! As father and son start making up for lost time, Adam soon discovers that he too is gifted with superpowers beyond his imagination. But little do they know, HairCo. the giant corporation Bigfoot is hiding from, is hot on their tails as Adams tracks have led them straight to him!

THE SON OF BIGFOOT is the latest film to come from nWave Pictures, a Belgian-American animation studio who have produced a number of modern family classics including ROBINSON CRUSOE (2016), THE HOUSE OF MAGIC (2013) and A TURTLE’S TALE: SAMMY’S ADVENTURES (2010), collectively selling over 1 million units to date.

Who plays the voice of Bigfoot