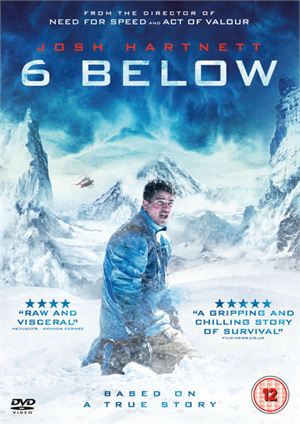 Josh Hartnett has been pretty low in profile over the past few years but here in ‘6 Below’ he takes front and centre stage as Eric LeMarque a thrill-seeking snowboarder with a weight of personal demons on his back. When he gets lost in a massive winter storm in the back country of the High Sierra Mountains, LeMarque is pushed to the limit and forced to battle those demons head-on as he fights against the worst the elements can throw at him.

In support is Mira Sorvino (whose Dad, Paul, has recently and very kindly kindly offered to smash Harvey Weinstein’s face in for impeding his daughter’s career) as LeMarque’s equally determined mother. With the wilds of Utah providing the film’s jaw-dropping backdrop and giving Hartnett a taste of what LeMarque went through in real life, director Scott Waugh (Need For Speed, Act Of Valor) delivers an assault on the senses that thrills – and chills – to the bone.

An unbelievable true story set in sub-zero temperatures that you can watch in the comfort of your own home if you enter our competition to win a copy of the film just by answering the following question:

b) Black Hawk Down