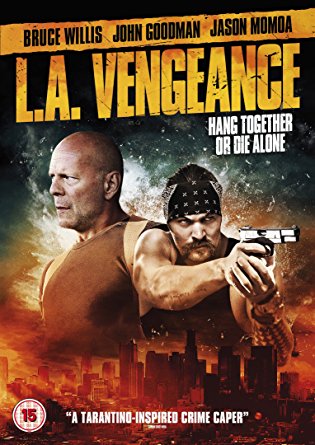 We all love our pets and we’re sure the Editor loves his two pets, Damian and Adolf (‘What? Those are my kid’s names!’ – Ed).  Unfortunately he received some bad news yesterday when the fate of his missing pet tortoise was discovered. We say, unfortunate, only because it appears that, having returned from a big night out at The Nags Head, the Editor mistook the hibernating hardback for a Ginster’s pastie. Not wanting to tell the kids about the fate of the pet he’s now trying to convince them that the chicken & mushroom slice he’s placed in a cardboard box full of straw is the deceased yet surprisingly tasty tortoise.

In similar vein this week’s competition is to win a copy of L.A. VENGEANCE, a revenge-fuelled action-comedy starring BRUCE WILLIS as a LA-based private investigator who, after his dog is kidnapped by a notorious gang, forms a questionable alliance with the gang’s leader (JASON MOMOA) to help retrieve his stolen goods in order to get his beloved pet back.

Jason Momoa recently starred as Aquaman in which film?