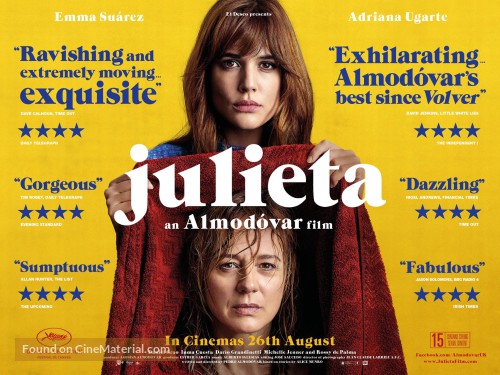 Now for a bit of culture with your chance to win ‘Julieta’ the new  film by Spanish director Pedro Almodovar.

This was the UKs highest grossing non-Hollywood foreign language film since 2012 and got three nominations at 2016’s European Film Awards including Best Film and has been submitted for consideration as Best Foreign Film at this year’s Oscar’s which makes it Almodovar’s sixth film to represent Spain.

‘Well this is all very well’, we hear you say, ‘but what is it about?’

12 years ago Julieta’s daughter, Anita, abandoned her without warning and hasn’t spoken to Julieta since. So when a chance encounter brings news of her daughter, Julieta returns to her former home to revive her search for Anita whilst also examining events that led up to her daughter’s estrangement.

This is quite some film and packs an emotional punch as it examines why some people abandon those that they love erasing them as if they meant nothing and deals with the pain that this brutal desertion provokes in the victim.

To win a copy of the film just answer the following question?

Which of the following is a Pedro Almodovar film?

a) Women on the Verge of a Nervous Breakdown

b) Men to tie up and tie down