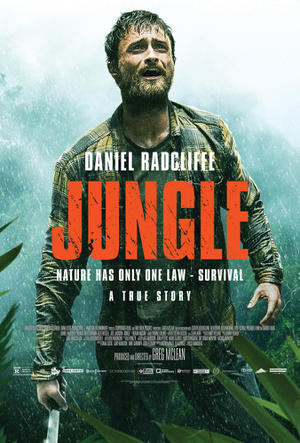 70’s hip hop pioneers Grandmaster Flash and the Furious Five in their old school rap classic ‘The Message’ told us, ‘It’s like a jungle sometimes it makes me wonder how I keep from going under’  as they rapped about their plight surviving the inner city ghetto’s of New York. However it loses much of its gravitas when yelped by our Editor, a portly, balding middle aged, middle class white bloke whose only ‘hood is the one on his Barbour jacket and about as credible a rapper as Amanda Holden is as a Britain’s Got Talent judge (‘You’re fired!’– Ed). However bad the ghetto jungle was for Mr Grandmaster it can’t have been as bad as the one featured in, ‘Jungle’.

The terrifying true story of one man’s 17-day fight for survival in the Amazon rainforest is portrayed brilliantly by Daniel Radcliffe (The Harry Potter franchise, Imperium) in JUNGLE, arriving on digital platforms from 22nd December, 2017 and on Blu-ray and DVD from 1st January, 2018, courtesy of Signature Entertainment.

Young Israeli Yossi Ghinsberg (Radcliffe) leaves a safe future behind to chase an improbable dream in the mysterious depths of the Amazon rainforest. When he and two fellow adventurers, Kevin Gale (Alex Russell; Chronicle, Unbroken) and Marcus Stamm (Joel Jackson; TV’s The Wrong Girl), meet the charismatic Karl Ruchprecter (Thomas Kretschmann (The Avengers: Age of Ultron, Central Intelligence) and follow him into the jungle, what begins as the realisation of a dream soon turns into a harrowing psychological fight for survival.

Daniel Radcliffe gives a mesmerising and transformative performance as Ghinsberg, with the physical and mental ravages the star and his real-life counterpart experienced visible for all to see. Radcliffe is joined by Thomas Kretschmann as the magnetic yet sinister Ruchprecter, and Greg McLean (The Belko Experiment) directs, ratcheting up the tension to nightmarish levels as the jungle starts to take a horrifying hold.

Based on Ghinsberg’s own book, ‘Jungle: A Harrowing True Story Of Survival’, JUNGLE delivers a Radcliffe we’ve never seen before and a thriller like no other, not to mention a stark warning as to what lies in the dark depths of the Amazon for anyone planning to go off the beaten path…

Here’s your chance to win a copy of the film just by answering the following question?

Greg McLean directed what 2005 film about an Australian serial killer?