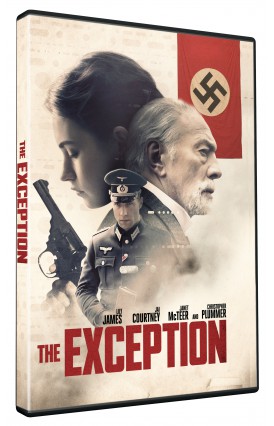 We’ve been fans of Christopher Plummer for a long time and whether it’s  as the uptight Captain Von Trapp (not cockney rhyming) in ‘The Sound of Music’ or the uptight Doctor in ‘Twelve Monkeys’ or the uptight business magnate  in ‘The Girl with the Dragon Tattoo’ no one does uptight quite like him. So it came as no surprise that he’s playing Kaiser Wilhelm who is…..well uptight obviously.

This weeks film to win is The Exception which follows Nazi captain Stefan Brandt (Jai Courtney; Suicide Squad, Terminator: Genisys) is sent on a mission to investigate a threat to the exiled Kaiser Wilhelm II (Christopher Plummer). Arriving at the Kaiser’s secluded mansion, Brandt learns that local resistance and British Intelligence are moving in on the deposed German monarch. As he begins to infiltrate the Kaiser’s life in search of clues, Brandt finds himself drawn into an unexpected and passionate romance with Mieke (Lily James; ), one of the Kaiser’s maids.

Also featuring Janet McTeer (TV’s The White Queen, The Woman In Black), Ben Daniels (TV’s House Of Cards, The Hollow Crown) and a mesmerising cameo from Eddie Marsan (Atomic Blonde) as the terrifying Heinrich Himmler, THE EXCEPTION is based on Alan Judd’s international bestseller, ‘The Kaiser’s Last Kiss’ and is brought to the screen by acclaimed theatre director David Leveaux (The Glass Menagerie with Jessica Lange, Neil LaBute’s The Distance From Here).

With Plummer, James and Courtney delivering stellar performances and leading an incredible ensemble cast, THE EXCEPTION is a thrilling, complex treat from start to finish and the perfect accompaniment to the onset of autumn.

In 2012 at 82 years old Christopher Plummer became the oldest actor to win an Oscar for Best Supporting Actor in which film?

The casting of The Losers Club in It Chapter Two