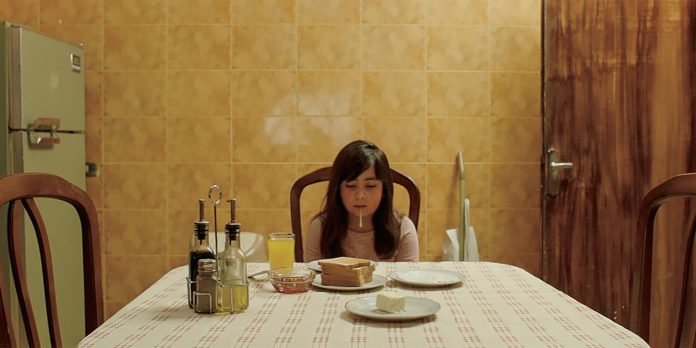 Here’s a terrific film to really, really creep you out!

Tehran, 1988. Shideh lives amid the chaos of the Iran-Iraq war. Accused of subversion and blacklisted from medical college, she is in a state of malaise. Furthermore, her husband is at war, leaving her alone to protect their young daughter, Dorsa. Shortly after a missile hits their apartment building but fails to explode, Dorsa falls ill and her behaviour becomes increasingly disturbed. Searching for answers, Shideh learns from a superstitious neighbour that the cursed, unexploded missile might have brought in djinn – malevolent spirits that travel on the wind. Convinced that a supernatural force within the building is attempting to possess Dorsa, Shideh finds she has no choice but to confront it if she is to save her daughter.

A huge word-of-mouth success at this year’s Sundance Film Festival, British director Babak Anvari’s debut feature UNDER THE SHADOW played in the coveted midnight slot and garnered significant praise and multiple comparisons to the breakout ‘Intelligent Horror’ smash hits of recent years: The Babadook, It Follows and The Witch.

The film skilfully blends a rarely explored supernatural mythology to life within a smart anti-war and feminist allegory, sitting alongside both genre favourites such as Ana Lily Amirpour’s A Girl Walks Home Alone At Night and the social realism of Asghar Farhadi.

Don’t be put off by the subtitles…..this is a magnificent horror film and you can win a copy here just by answering the following question.

Tehran is the capitol of which country?

Win The Last Letter from your Lover blu-ray