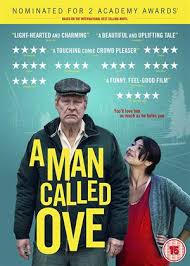 Curmudgeonly and cantankerous old grumps can be a right pain just ask any of us who have to work with the Editor on a daily basis (‘You’re Fired! – Ed) but they make great viewing – you only have to watch the TV comedy series, ‘One Foot in the Grave’ to see just how great hilarious their screen incarnation an be and this weeks film to win, ‘A Man called Ove’ owes more than a little to that top comedy show.

Based on the international bestseller by Fredrik Backman, Hannes Holm’s, A MAN CALLED OVE has received widespread international acclaim since premiering on the festival circuit, picking up multiple accolades, including a European Film Award for Best European Comedy and two Oscar® nominations.

An isolated retiree with strict principles and a short fuse, Ove (Rolf Lassgård) is the quintessential angry old man next door. Having entirely given up on life, his days are spent in a constant monotony of enforcing housing association rules and visiting his wife Sonja’s grave. But when a boisterous young family moves in next door, immediately incurring his wrath, things take an unexpected turn. Pregnant Parvaneh (Bahar Pars) and her lively children are the complete antithesis of what ill-tempered Ove thinks he needs – and yet, from this inauspicious beginning an unlikely friendship blooms and Ove’s past happiness and heartbreaks come to light.

This is a wistful, heart-warming tale of unreliable first impressions and a wonderful reminder that life is sweeter when it’s shared. So is the film that the inevitable Hollywood remake is to star Tom Hanks.

In the TV series ‘One Foot in the Grave’ what was the name of the lead character played by Richard Wilson?

Win a copy of the horror film, ‘Temple’…….EXPIRED