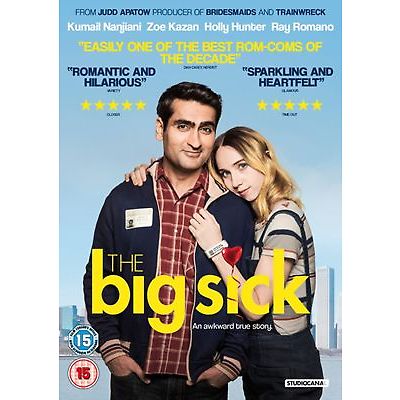 Thankfully this doesn’t do what it says on the tin as a 90 minute feature film about a pool of vomit would seem to have limited commercial appeal. Instead ‘The Big Sick‘ is based on the real-life courtship between acclaimed stand-up comedian Kumail Nanjiani (Silicon Valley, Portlandia, Central Intelligence) and writing partner Emily V. Gordon (The Meltdown with Jonah and Kumail), and tells the story of Pakistan-born aspiring comedian Kumail (Nanjiani), who connects with grad student Emily (Zoe Kazan) after one of his standup sets. However, what they thought would be just a one-night stand blossoms into the real thing, which complicates the life that is expected of Kumail by his traditional Muslim parents.

When Emily is beset with a mystery illness, it forces Kumail to navigate the medical crisis with her parents, Beth and Terry (Holly Hunter and Ray Romano) who he’s never met, while dealing with the emotional tug-of-war between his family and his heart.

THE BIG SICK represents a brilliantly unexpected journey that began when Emily Gordon heckled Kumail Nanjiani at a stand-up show in Chicago, a fact which Kumail pointed out to Judd Apatow when he shared a stage with the celebrated producer at the 2012 SXSW Festival. The product of following conversations between the two comedians has resulted is one of the funniest, most refreshing romantic comedies of the year.

We’ve got 3 copies to give away just by answering the following question.

Holly Hunter won an Oscar for Best Actress in which film?

b) O Brother where art thou?