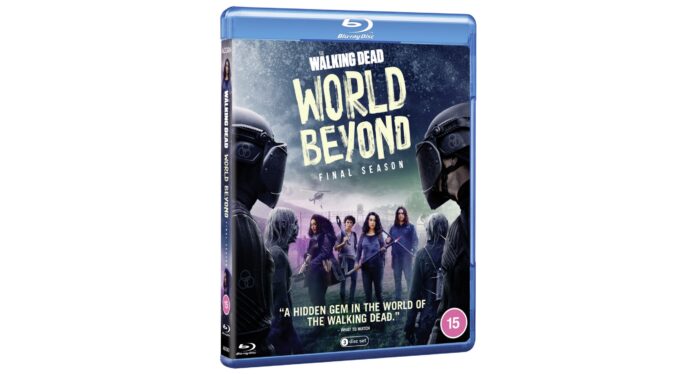 The Walking Dead has been a hugely successful series although we must admit that it was only as the as the credits rolled at the end of first episode of a show that featured monosyllabic, dead in the head zombies shuffling around grunting unintelligibly that we realized we had been watching The Only way is Essex…..but we digress. So prepare to go beyond the favourite cult zombie hit The Walking Dead, with this wicked spin-off that returns for its grand finale. Sink your teeth into The Walking Dead World Beyond: Final Season – that takes us on a gloriously gruesome and gripping journey through this archaic apocalyptic world.

Expanding on the long-running monster-hit universe of The Walking Dead, this series delves into new mythology that follows the first generation raised in a surviving civilisation of a post-apocalyptic world. The Walking Dead: World Beyond: Final Season is set for a Blu-ray and DVD release on 10th October, courtesy of Acorn Media International and we’re giving you a chance to win a copy

Picking up where the first series left off, it concludes the epic story of Iris (Aliyah), her rebellious adopted sister Hope (Alexa Mansour), the intellectual Elton Ortiz (Nicolas Cantu) and the mysterious Silas Plaskett (Hal Cumpston ) –  four friends who journeyed across the country on a mission that transformed everything they knew about themselves and the world. As they face off against the mysterious Civic Republic Military and fight for control of their own destiny, goals will shift, bonds will form and crumble, and innocence will be both lost and found…

In series one we meet the group of teenagers in Nebraska, 10 years after the end of the world. On an important quest, the teens are pursued by both those who wish to protect them and those who wish to harm them as they brave dangers, known and unknown, living, and undead…

To win a copy of The Walking Dead: World Beyond just…..