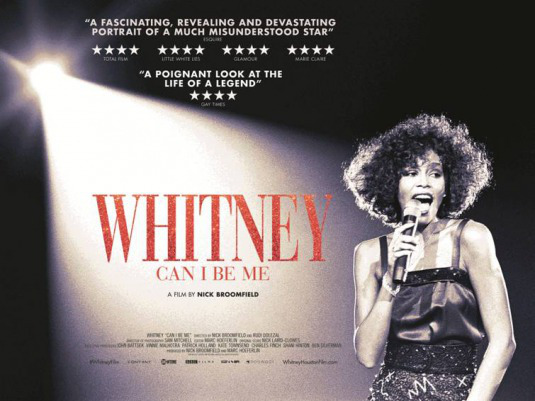 Whitney Houston’s life story is one of the rise of a voice of an angel reduced to a drug addled, caterwauling, shambolic shower of shite and is undoubtedly a tragic one and the life of a musical legend is incisively and sensitively explored by renowned documentarian Nick Broomfield in the essential WHITNEY ‘CAN I BE ME’, arriving on digital platforms and on Blu-ray and DVD from September 4th courtesy of Dogwoof.

An unparalleled icon, Whitney Houston was, for many, the original diva, her legendary voice providing a soundtrack to her myriad fans’ lives. But behind the music was a complex, isolated woman haunted by insecurities and demons. WHITNEY ‘CAN I BE ME’ examines Houston’s New Jersey gospel roots, her rise to global fame in the 1980s and the key relationships in her life, building to deliver the clearest picture yet of a star still sorely missed.

With contributions from those who were around her throughout her career, WHITNEY ‘CAN I BE ME’ also offers insight into the 1999 world tour where things began to unravel, with co-director Rudi Dolezal offering a glimpse of the real Houston in previously unseen behind-the-scenes footage.

Respectfully looking into Houston’s life, Nick Broomfield (Kurt & Courtney, Biggie & Tupac) adds balance to the tabloid headlines that dogged the end of Houston’s career, providing a portrait of trailblazing talent whose memory continues to live on.

Which film did Whitney Houston star in and also sing the song, ‘I will always love you’?

a) Waiting to Exhale

b) The Preachers Wife