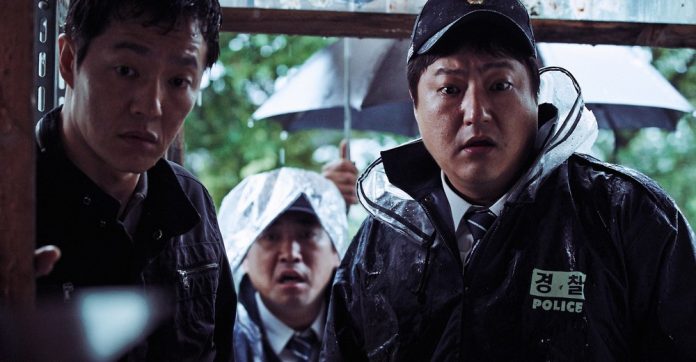 Unlike the sound the Editor makes when he gets his tax bill ‘The Wailing’ is a South Korean box office smash about a riveting police investigation which turns into a sensationally terrifying thriller as a likeable cop is drawn into a nightmarish hunt for a source of pure evil disturbing his quiet, rural village.

Out of his depth, local police officer Jong-goo investigates a spate of killings, as well as an outbreak of madness seemingly connected to the recent arrival of a mysterious Japanese man who resides in the outskirts of the village. What’s more, he is horrified to discover his young daughter may have fallen under the stranger’s curse.

Jong-goo calls on a charismatic shaman to free his daughter from the stranger’s dangerous influence, but the shaman’s intense exorcism ritual threatens to worsen the situation… and Jong-goo, with his world collapsing around him, realises he must confront the ultimate evil.

This is a must for horror fans and having taken over $50 million dollars in South Korea alone, the film is a stunning entertainment quite unlike anything that’s gone before. Hong- jin Na (who directed the acclaimed thriller, ‘Chaser’) effortlessly combines bone-chilling frights and heart-wrenching drama with moments of comedy to relieve the nerve-shattering subject matter.

Packed with real emotional weight, and a devilish final act twist, this is assured, impressive and wildly original piece of film making featuring inept cops, red-eyed flesh chewing ghouls, a mysterious shaman and a sinister stranger, as well as the most foul-mouthed youngster since the Editors kids came into the office.

Beautifully filmed in the mountains of South Korea, and dripping with atmosphere, Na’s film features an unlikely leading man, Do Won Kwak, a comically incompetent cop who has to face down an extraordinary evil to save his family and his village.

Early, humorous scenes give way to a nightmarish battle between good and evil, including an exhilarating, jaw- dropping exorcism set piece, conducted by Jung-min Hwang as the charismatic shaman, and a brutal, multi-layered showdown that lingers long in the memory.

The Wailing broke box office records on its release in South Korea, garnered rave reviews after showing at Cannes 2016, and played at the prestigious BFI London Film Festival.  THE WAILING is an epic, assured horror film of The Exorcist-like proportions that will terrify, amuse and astound in equal measure.

Here’s your chance to win a copy of the film by just answering the following question.

a) Train to Busan

Win a copy of Drop Dead Gorgeous with its all star cast!