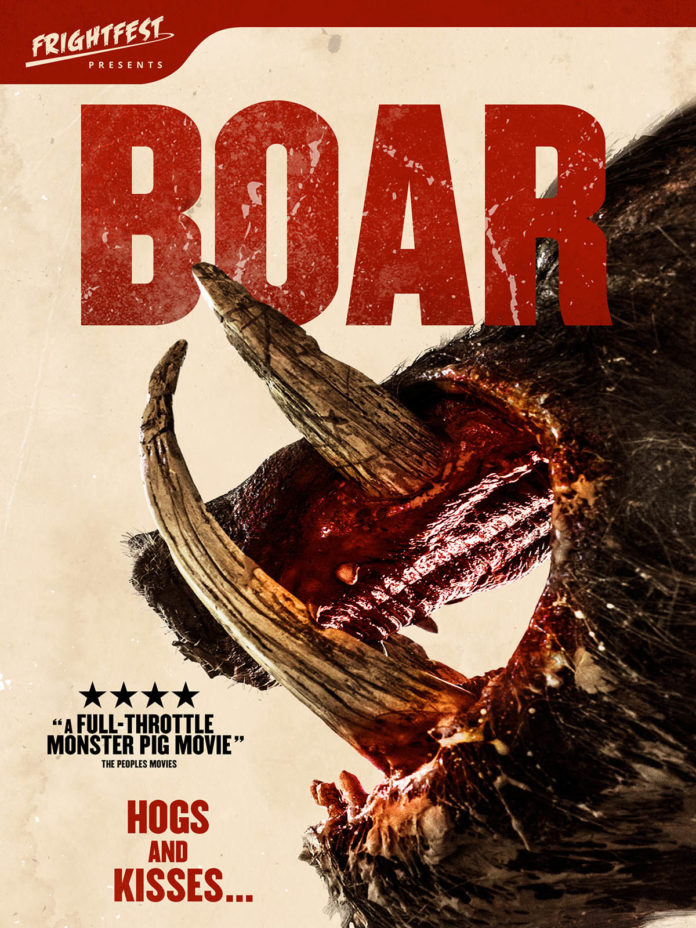 What surprised us most about Boar , the story of a lumbering beast with a ruthless need for food, was that it turned out not to be the life story of Gemma Collins. Instead Boar is set in the harsh, yet beautiful Australian outback where a beast, an animal of staggering size, with a ruthless, driving need for blood and destruction, now lives. It cares for no one, defends its territory with brutal force, and kills with a raw, animalistic savagery unlike any have seen before. Believed nothing more than a myth, a legend brought to life by a drunken hunter, the beast ventures closer to civilization. But when the bodies of two of its most recent victims are discovered, it is up to locals, and an out-of-town family caught in the carnage, to halt the killer pig in its tracks. Frankly it does sound more and more like the story of TV celebrity salad dodger Gemma Collins but we digress…….

Director Chris Sun, has assembled an awesome cast of genre film legends – Bill Moseley, who played Chop-Top in The Texas Chainsaw Massacre 2; the superb John Jarratt from the Wolf Creek films; Roger Ward and Steve Bisley, the cops from Ozploitation classic Mad Max; and the formidable former WWF star Nathan Jones, who played Rictus Erectus from Mad Max: Fury Road, who here gets to indulge in some no-nonsense boar-wrestling, as well as lip-synching to Vanilla Ice.

Sun mixes a foul-mouthed, funny script with a superbly realised monster, stomach-turning gore effects, and a splendid amount of jump-out-of-your-seat boar attacks. If you like creature features then you’ll love this.

To win a copy just :

Here’s the trailer for Boar…….