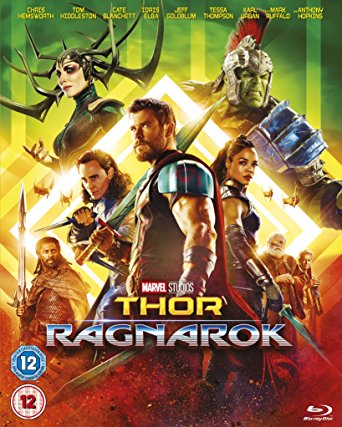 By our reckoning Thor Ragnarok was undoubtedly the best superhero film of last year. It certainly had one of the best trailers. It was up against Guardians of the Galaxy Vol 2, Justice League, Logan, Spiderman Homecoming, Valerian & Wonder Woman.  Though Guardians was probably the lightest in tone Ragnarok went for big belly laughs and succeeded admirably giving it an edge over the more sombre films which took themselves a little too seriously.

This change in tone can probably be put squarely at the feet of its director Taika Waititi. A comedy actor whose last film ‘Hunt for the Wilderpeople’  has him cameo as a church minister in an hilariously inappropriate funeral service. It’s a credit to Marvel studios that they allowed him to helm Thor Ragnarok. Having no background in huge blockbuster films he acquitted himself brilliantly in what became the most successful Thor film yet.

Thor: Ragnarok,” Thor (Chris Hemsworth) is imprisoned on the other side of the universe without his mighty hammer and finds himself in a race against time to get back to Asgard to stop Ragnarok – the destruction of his home world and the end of Asgardian civilization – at the hands of an all-powerful new threat, the ruthless Hela (Cate Blanchett). But first he must survive a deadly gladiatorial contest that pits him against his former ally and fellow Avenger – the Incredible Hulk (Mark Ruffalo) – and grapple with his silver-tongued adopted brother Loki (Tom Hiddleston), the fierce warrior Valkyrie (Tessa Thompson) and the eccentric Grandmaster (Jeff Goldblum).

Thor Raganarok is a truly great disc with a superb array of extras that makes it a must have and you can win a copy here just by answering the following question:

What 2016 all female blockbuster reboot did Chris Hemsworth appear as receptionist Kevin?