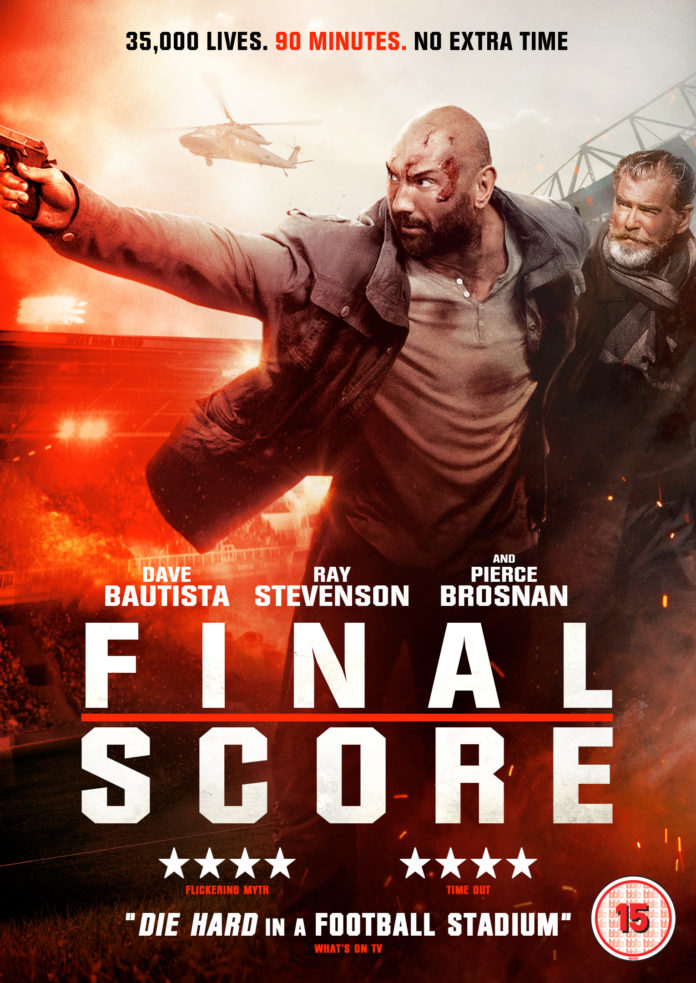 Our Deputy Editor eagerly awaits the Final Score of his beloved football team often rushing to tell us how they almost won 3-2 only to then tell us that they lost 7-0. It’s then that their hapless goalkeeper returns downhearted to the changing rooms where he puts his head in his hands…..and misses. But we digress because Final Score is far more entertaining.

Pitched as Die Hard in a football stadium it follows an ex-soldier Mike Knox (Dave Bautista – Guardians of the Galaxy) who must use all his lethal fighting skills to save 35,000 fans and prevent mass destruction when deadly Russian terrorists take Upton Park under siege in the Sky Original’s film, Final Score.

Believing his traitorous brother Dimitri (Pierce Brosnan) is somewhere in the stadium, Arkady (Ray Stevenson)  the former leader of a revolution in the Russian state of Sukovia, locks down the Boleyn Ground during the European semi-final between West Ham United and Dynamo FCC. In the crowd with his niece, Danni (Lara Peake), is US- veteran Mike Knox (Bautista), who stumbles upon the plot and goes about taking out Arkady’s heavily armed team. Can he get to Arkady before Arkady gets to Dimitri? The fate of 35,000 people inside the stadium – and many more in Russia – depends on it….

Here’s a chance to win a copy of the film all you have to do is…..

Here’s the trailer for Final Score……

Your Christmas or Mine? – TRAILER